I’ve been away for the last week, enjoying the peace and quiet of the Bega Valley with Halinka and Penry the Spacklehound. We did all kinds of sight seeing, visited cool little towns and gardens, went horse rising with friends and generally had a ball. It was very relaxing. However, the highlight of the trip for me was finding some treasure.

You know how you look at the bookshelves in antique stores, desperately hoping to stumble across that elusive and rare first edition… Wait, is it just me or do other people do that too? Well, it’s what I do. And last week, in an antique store in Cobargo, I saw something on the shelf that made my heart race.

Not quite the first edition that would have been an incredible find, it’s actually a second edition and a little bit scruffy, but it’s so damn cool. It’s a copy of the second edition from Rider & Sons of Eliphas Levi’s The History Of Magic (translated by A E Waite). This book was originally published by Rider & Sons in 1913 and that edition is worth over $2,000 now for a good one. So a slightly scruffy second edition from 1922 is still a very exciting find. Here it is: 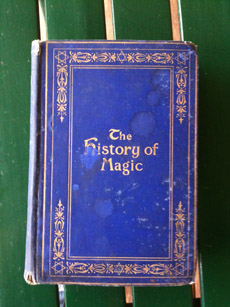 As you can see, it’s far from a mint condition example, but it is fantastic nonetheless. The full title of the book is The History Of Magic, including a clear and precise exposition of it procedure, its rites and its mysteries. For those of you not so up to speed on the study of the occult, maybe I should make clear why this book is so cool.

It’s by a guy called Eliphas Levi, whose real name is Alphonse Louis Constant. He was a French occultist and he was largely responsible for the revival of interest in magic in the 19th century. He wrote a number of things including The Dogma and Ritual of High Magic, Transcendental Magic, The Key of Great Mysteries and others. Levi “believed in the existence of a universal ‘secret doctrine’ of magic throughout history, everywhere in the world.” It’s worth bearing in mind that Levi’s work has been called “highly imaginative but not very accurate”. Regardless, from a historical point of view, for a scholar of all things occult, Levi’s work is very important. The translation from the French in this case is by A E Waite. Waite was an American occultist, member of numerous societies such as the Hermetic Order of the Golden Dawn and the Freemasons. Incidentally, as a point of interest, Aleister Crowley, one of the Golden Dawn’s most famous (infamous?) members, claimed to have been the reincarnation of Eliphas Levi, as Levi died while Crowley was in utero.

You can learn a lot more about Levi, Waite and Crowley with internet searches if you’re interested. For me, fascinated as I am by all things occult, this book is a genuine treasure. It’s a real grimoire as well as an incredibly interesting historical document. It’s also rare, which makes it all the more delicious. I am an unrepentant bibliophile, after all. Maybe I’m a bit weird, but this is the kind of thing that I get very excited about. (I don’t know this for sure, but I would also bet that this book was a large inspiration for Susannah Clarke’s Jonathan Strange & Mr Norrel. This book, with footnotes by Waite, could easily be a part of Clarke’s story.)

You can still buy The History Of Magic in paperback from Amazon, so for scholarly reasons you can still read the text. But for me, finding an edition like this, nearly a hundred years old, has a magic of its own. As much as I love ebooks and firmly believe that ebooks will become the mainstream before too long, it’s things like this that will ensure that real books never die.