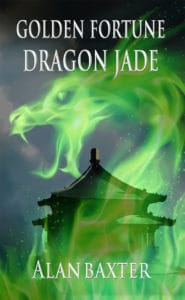 My next venture in self-publishing is officially released on March 3rd. Golden Fortune, Dragon Jade is a kind of re-release. I’d always wanted to write something in the vein of the great wuxia (martial heroes) kung fu epics I’ve loved so much my whole life. I’ve been a career martial artist for four decades, so kung fu has been an integral part of me for pretty much forever. But I’m a horror and dark fantasy writer for the most part, and had never got around finding a good story to scratch that wuxia itch. Then, back in 2016, Lindy Cameron of Clan Destine Press asked me to write a story for her new anthology. She wanted big stories, full of epic adventure, with fantasy or science fiction cores. But the story also needed to be a bit more family-friendly than my usual fare. And it needed an Australian connection. This is what came of that request.

The two protagonists in this yarn are cousins – he a Shaolin monk, her an accomplished geomancer. The Shaolin monk, Yong Fa, shares his first name with my Sifu, my kung fu teacher, in a subtle homage to him, and the character shows some of my teacher’s irreverence and cheekiness, but is otherwise an entirely made up person. The character certainly is not based on my Sifu. The geomancer, Zi Yi, is altogether more serious and focussed, but an accomplished mage in her own right. Together their skills are complementary and that’s just as well when they realise the scale of their task, the distance they have to go to track down their missing jade dragon, and the kind of unforgiving country they’ll be led to.

I’d had a nebulous idea for this Chinese-inspired fantasy story in mind for ages, with Shaolin martial arts and spirit magic, travel and adventure, but never quite had the framework to make it sing. Then the request for the story from Clan Destine Press said it needed an Australian connection of some kind, and I realised that setting this Chinese fantasy towards end of the Aussie gold rush would be perfect. It made the original idea better, and I was able to give a historical nod to my adopted country. It all catalysed into what I hope is an exciting novella.

You should check out the two volumes of And Then..? from Clan Destine Press, but as this is a story that’s unlikely to ever find its way into one of my collections, I thought it would be a good idea to release it on its own as a chapbook. And as I have more room to spare now, this is a slightly expanded and embellished version compared to the one originally published. I got to add a few flourishes I had to cut out before.

It was a hell of a lot of fun to write, and I hope people have at least as much fun reading it.

The Jade Dragon protected Long-En for centuries – until it was taken.

When the Jade Dragon is stolen from the temple in the quiet village of Long-En, the locals are stunned. The very idea of such a theft is unimaginable. And without the protection of the powerful icon, what awful fate might befall the peaceful hamlet?

Two young cousins, Li Yong Fa, a martial monk recently returned from years of training at the Shaolin Temple, and Li Zi Yi, a potent geomancer, team up to track down the thief, recover the priceless statue, and return it safely to Long-En. Little do they know how far afield they will be taken, and what dangers they will face in strange and inhospitable lands, before they even get close to their goal.

You can pre-order the ebook now and the paperback will be up for pre-order any day now. The book is out on March 3rd, so not long to wait. I hope you’ll give it a go. All the details and links are here.