You have to respect a good name. John Shelby Spong is a good name. Mr Spong is a retired Episcopal bishop and has recently written a book that should have all free thinking folk dancing for joy. The book is called Jesus for the Non-Religious. The publishers originally wanted to call it Freeing Jesus from the Shackles of Religion. It’s hard to decide which is the better title really. 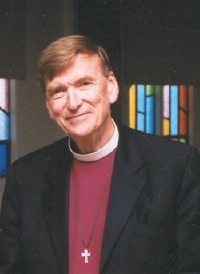 The basic thrust of the book is rather heretical to Christians, but awfully refreshing to those with a critical mind. Spong posits a number of things, but essentially that all the supernatural aspects accredited to the life of Jesus are fictional additions, tacked onto the cult of Christianity decades after the death of Jesus himself. Among the things that Spong denies are that Jesus was born of a virgin, that there were any miracles or that he rose from the dead. In other words, all the really meaty stuff on which modern Christianity is based.

We get a couple of fantastic quotes from Spong with regard to this latest book. For example, he does not believe that god sent Jesus to die for the sins of humans. That would make a victim of Jesus and god “the ultimate child abuser”. He suggests that the central message of Jesus, whoever or whatever he may have been, was for everyone to live lives full of love and compassion. What a blasphemer.

Naturally, there are those that are gunning after Spong for his book. One of those is Mark Thompson, president of the Anglican Church League, an evangelical lobby group. All right, we already know he has a bias, to say the least, but his comment is priceless. He accuses Spong of “defacing the only portrait of Jesus that makes any real sense.”

Right, so the idea of Jesus having magical powers, being born from a virgin and subsequently dying only to be reborn and ascend to heaven makes sense? More sense apparently than a decent bloke who tried to convince people to be nice to each other? Thompson goes on to say that “One cannot imagine anyone willing to be martyred for Spong’s Jesus.” Isn’t that a good thing? The idea of martyrdom is what leads idiots to strap bombs to themselves and blow up discos or fly planes into buildings. Surely rather less of that in the world is worth aspiring to.

Spong himself gets this week’s Word Quote of the Week, however. Rarely do we find a turn of phrase as expressive and succinct as this one. When questioned about the derision his views attract, Spong said that he was used to it and likened it to being “gummed to death by a herd of clacking geese.” I’m not sure that geese herd, but let’s not let pedantics get in the way of a damn fine insult.

Learn more about Spong at Wikipedia.

Spong, because I wanted to say it just one more time.