It all started a few years ago when mob hitman, Eli Carver, “woke up” in a car on a dark road. He was driving, but had no recollection of his life up to that point. Or where he was going. Or who the frightened woman in the passenger seat was. That was MANIFEST RECALL and I’m so pleased the book struck a chord with readers. A year later there was a follow up, RECALL NIGHT, in which Eli tried to ignore the ghosts of ex-hits that haunt him and get on with life. But that wasn’t so easy. Life for Eli Carver is weird. Now we have book three in the series, GHOST RECALL. This one goes up to 11. Eli finally accepts that he can no longer ignore the existence of his ghosts and it’s just as well, because he gets dragged into the most bananas supernatural adventure of his life thus far. Whether he survives or not, things will definitely never be the same again.

The amazing Laid Barron, award-winning author of Swift To Chase, said, “Ghost Recall bottles the essence of impending doom that drives the most powerful noir. A haunted man walks the neon streets of a soulless town and all around walls of darkness close in like the steel teeth of a trap. Vintage Baxter: fast, sleek, and bloody-minded.”

The book is out now in all stores, in ebook and paperback. You can also order a signed paperback direct from me. And as if that wasn’t enough, those fine folks at Grey Matter Press have reduced the ebook price of book 1, Manifest Recall, to just 99c for a limited time, so now is a great time to get into this series if you haven’t done so yet.

Click through to this page for all the info and buy buttons – those buy buttons list all the stores as well as the signed paperback option. Or just order wherever you prefer to buy books or, of course, your local library. 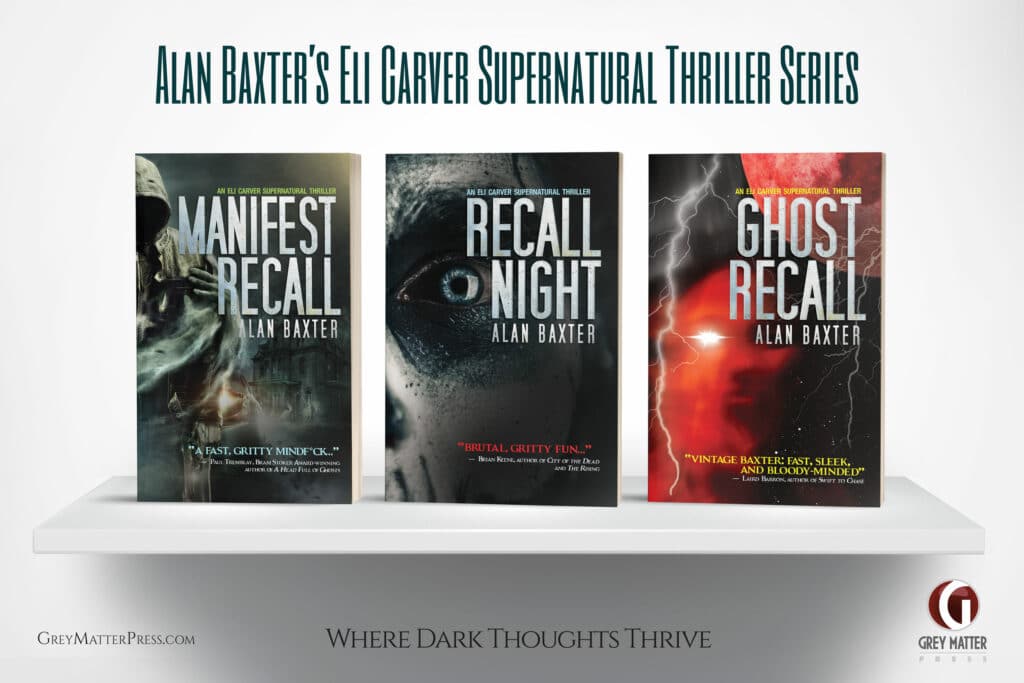 “Ghost Recall bottles the essence of impending doom that drives the most powerful noir. A haunted man walks the neon streets of a soulless town and all around walls of darkness close in like the steel teeth of a trap. Vintage Baxter: fast, sleek, and bloody-minded.” – Laird Barron, author of Swift to Chase

“Expect collateral damage, blockbuster fight sequences and of course, some great banter between the ghosts and Eli. The previous two entries were both really fun reads, filled with emotions and creating a rollercoaster ride for the reader. This one does the same, but  turns it up a notch… I always love reading Alan’s work. He inflicts everything with darkness, depth, emotions and some of the best action/fight scenes out there” – Steve Stred at Kendall Reviews

“The interplay between Carver and his latched-on ghosts is always a highlight, and possibly the best part of this novella is Baxter early on establishing a new precedent for this relationship that changes the game in a big way. It’s not too long after this that a truly shocking moment comes out of left field as an indirect result. It’s all a nice touch that goes a long way to keep this series the furthest thing from stale, even three books in. While Ghost Recall doesn’t end on a cliffhanger per se, Baxter makes it clear he’s not stopping at a trilogy. With this being the strongest entry in the series yet, I can get behind that decision. – Brennan LaFaro at Dead Headspace

“Ghost Recall is a hell of a lot of fun. Baxter keeps the action swift and furious, and the pressure high, leavened with occasional moments of dark levity. It’s the perfect blend of noir and occult horror – imagine Jason Statham leading The Frighteners if written by Laird Barron and you’re on the right track.” – Michael Patrick Hicks

“If you like your fiction short and sweet, with the back-kick of a mule laced with razorblades, then perhaps it is time to jump into the slipstream of this awesome tough guy created by Alan Baxter… The plot is top heavy with vicious action sequences, a substantial body count and Alan Baxter has a real knack of delivering unrelentingly brutal battles which would not be out of place in a Tarantino flick, or the Hong Kong Heroic Bloodshed films of the 1990s.” – Tony Jones at Ginger Nuts of Horror