Genesis of The Roo 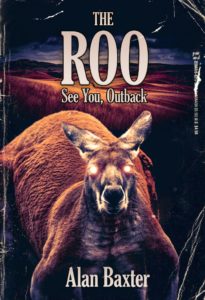 Every once in a while, a bizarre situation unfolds that you could never plan, but which takes over everyday life for a little while. This all started with a ridiculous situation on Twitter. There was a news article going around with the headline: ‘Australian Town Terrorised By Muscular Kangaroo Attacking People And Eating Gardens’. A more Australian story is hard to find.

When author Charles R Rutledge tweeted that it sounded “like something Zebra Books would have published back in the day”, Kealan Patrick Burke (superb author and excellent cover designer) mocked up a brilliant old school horror novel cover in response. Several of us started joking about how a cover that cool really should be on an actual book. One thing led to another, and as I was the Aussie in the conversation, people started saying I should be the one to write it. And honestly, the cover had inspired me. The timing was fortuitous in two significant ways: For one, I’d just hit a period where I was planning to take a month off from other projects and write a couple of short stories – so I thought I could write this instead. Secondly, one of those planned short stories was going to be an outback horror story addressing themes of domestic violence – so I decided I could use this story, which in my mind was a novella, instead. I thought it would be a really fun creature feature. But surely, the whole concept was just nonsense. A bit of a joke. Then people kept hassling me to write it. I even got a few private messages along the lines of, “Dude, please, you have to do this!” Terrible enablers, all of them. They were actually fucking serious.

And I’m easily led astray, it would seem. So I asked Kealan if I could have the cover were I to write a killer roo story. He said yes, but he wanted to polish it up, rather than the five-minute mock-up he’d done originally as a joke. So that’s what he did. And enough people bugged me that I did in the end agree to write it, based on the fortunate circumstances outlined above. I knew the idea was perfect for a horror novella. As I mentioned, I already had a short story in mind, so the general framework was already in place. I could extend it into a novella without too much work. There’s no way I would usually be able to turn around such a big story so quickly, but as the bones for this had already been marinating in my brain juices for some time, changing the threat to a killer kangaroo wasn’t much of a leap. In fact, it turned out to be a better idea than the story I was originally planning to write.

So I wrote it. I decided I would self-publish it in short order, while people were still excited for it. I think it’s a good idea to have a few self-published bits and pieces in my catalogue and I’d been intending to release a some more, but wasn’t sure what. So, why not start with this? 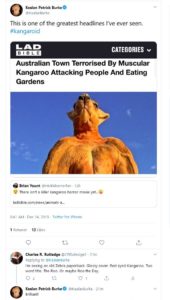 Buzz on Twitter was great, lots of people really looking forward to the book, so I got right on it. Normally I can’t write an entire novella in a couple of weeks, but this one just poured out of me. Incredibly, all this started on December 16th, and by January 16th I was uploading the book files with a January 28th publication date. The power of modern self-publishing! I’ve never turned anything around so fast before, and it’s not something that would ever happen often. This one feels fated. And honestly, it’s been a blast!

But I didn’t do it all alone. I didn’t want to half-arse it. This needed to be a full-arse extravaganza. I can’t thank Kealan Burke, Amanda Spedding (of Pheonix Editing), and David Wood enough for helping me with cover, editing and layout respectively at the ridiculous short notice speeds I was working to. I couldn’t have done this without them. Thanks for prioritising me, guys! The cover of the book you see above is Kealan’s amazing work, after he took the original concept and polished it into that incredible piece of art.

Here’s the back cover blurb for the novella inside:

Something is wrong in the small outback town of Morgan Creek.

A farmer goes missing after a blue in the pub. A teenage couple fail to show up for work. When Patrick and Sheila McDonough investigate, they discover the missing persons list is growing. Before they realise what’s happening, the residents of the remote town find themselves in a fight for their lives against a foe they would never have suspected.

And the dry red earth will run with blood.

In keeping with the theme, I’ve shamelessly written the book to be as ocker as the outback. There are words and phrases in it that will no doubt confuse non-Aussies. So there’s a (limited and certainly not exhaustive) glossary of Australian slang and terminology in the back. You might need to look up some translations. If you’re not too familiar with the anatomy of kangaroos, may I also suggest you Google ‘kangaroo feet’ before you start reading. Seriously, you might think you know, but have another look. They’re insane.

Almost every main character in this story is named after someone on Twitter who goaded and cajoled until I caved and agreed to write it. But I just used their names – the characters are most definitely not based on those people. This is the kind of thing that happens when horror writers and reviewers are dicking around when they should be working.

Add THE ROO to Goodreads. 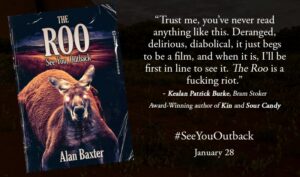