I’m often entertained by notices in public places, from street signs to restaurant menus and everything in between. Sometimes it’s a case of English as a second language creating the funnies. Other times it’s people trying too hard to say the right thing. After Freecon this Saturday a bunch of us went out for dinner and I found some comments on a menu that seem to be the result of both these things. 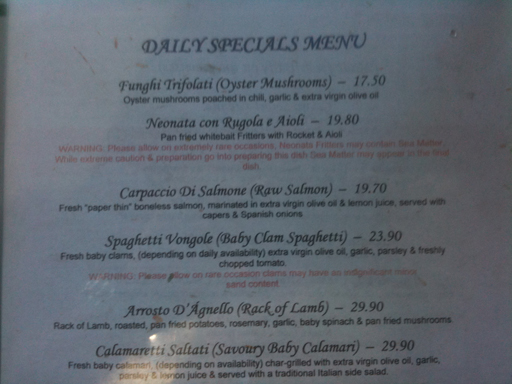 The photo hasn’t come out all that well unfortunately. It’s the red bits that made me laugh. The one at the bottom under Spaghetti Vongole says:

Well, it’s either insignificant or minor. And if you can notice it while eating the clams, it’s really neither.

The one above that is even better:

There is so much wrong with this sentence. First and foremost, what the fuck is Sea Matter? That could mean anything from a shark to a turd. Also, notice that extreme preparation goes into preparing that dish. Is that preparation while bungee jumping or something?

And it was a night for weird wordage. While at the restaurant I was sending an email from my iPhone about the board game High Frontier. I made a slight typo in the word “boardgame” and look what the old Autocorrect suggested:

That’s right Apple. You won’t show boobs in any of your applications, but you’ll jump at the chance to suggest “bisexuals” when I’ve typed “biardgame”.