For the ever more infrequent Friday Guest Post, here’s something very entertaining from Michael Fridman, fellow Blade Red Press author and all-round interesting fellow. In this post he explores the legacy of language derived from our less than prudish past and some stories that are worth checking out for some olden days racy fun. There are loads of very cool links throughout this piece, so be sure to check them out. 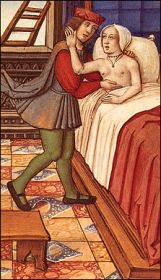 Guest Post by Michael of a Nadder Good writing is often harsh. It avoids euphemisms and lays out the bare truth behind a character or storyline. Say, in Alan’s Realmshift when Samuel Harrigan first s…oh never mind, just read it if you haven’t. Or in Catch 22 when Yossarian unexpectedly shows up not wearing any clothes (because he doesn’t want to). Sometimes the best way to make a point is with some crudity or ridiculousness.

Where does this tradition come from? I think the roots are partly in classic medieval literature. Now, we sometimes have strange ideas about the past. Probably because the past itself is strange. Being Spawn of the Satanic Sexual Revolution, we often associate “medieval” with sexual prudishness and the stranglehold of the Church (at least in Europe). There’s an element of truth to it. But it’s not the whole story.

Though official chronicles and epic romances can be quite pompous, the ordinary people weren’t much different from us. For example: as you might know the medieval European town often segregated people by profession — and named the street accordingly. Miller and Baker Street are examples that have survived unto today. Interestingly, prostitution was no different, with female prostitutes often congregating in a single street in a typical English town. Its common name? Gropecunt Lane (by now these streets have evolved to something more tame, like Grape Lane). The medievals were quite direct with their words and images.

But of course this goes beyond Street Naming Conventions in Britain in the 14th Century (now there’s a niche!) — because we probably owe a great deal in the sharpness of our “cutting edge” literature to works from the period:

Gargantua and Pantagruel Forget Douglas Adams, this is the original Trilogy in Five Parts. A great satirical classic, it has in my opinion much more hidden meaning and allegory than any religious text. Rabelais makes fun of every aspect of his society, including a graphic description of Gargantua’s diarrhea which drowns most of Paris, a list of about 250 items you can append before “fool” when insulting someone and a climax where the characters go into battle with an army of fried pig intestines. Go figure.

The Decameron This was the partial inspiration of Chaucer’s Canterbury Tales and shows that the Italians were also open to glorious crudeness. More so than Chaucer, this collection is known for every saucy combination imaginable. Of particular note are tales of the sexual adventures of monks and nuns — probably a more accurate reflection of reality than the celibacy “ideal” promoted by official sources. My personal favourite is the First Tale of the Third Day. The author gave each tale a quick one-line summary. The translated summary for this one is “Masetto da Lamporecchio pretends to be deaf and dumb in order to become gardener to a convent of nuns, where all the women eagerly lie with him.” Believe it or not, Castle Anthrax in Monty Python and the Holy Grail wasn’t 100% original…

But That’s Not All. Of course crudity is not specific to medieval Europe. It can happen:

And thus, I recommend reading some of these wonderfully-risqué works, or at least appreciating the great debt we probably owe them today.

To see more rants by Michael check out his blog at a Nadder.