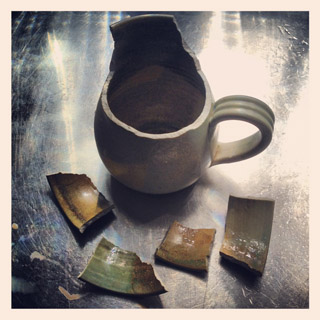 A wet hand, a moment’s inattention and tragedy. Disaster struck! My favourite coffee mug is dead. Broken. Gone. This might seem like an over-reaction to people who don’t understand the attachment a writer can have to their favourite mug. Coffee is the fuel of writing – the actual energy used in the production of words. Along with alcohol, tears, angst and blind pig-headed stubbornness, it’s how stories are born. Word babies gestate in a sea of caffeine.

My wife bought me this mug some years ago. It holds nearly two palrty “normal” sized mugs worth of coffee. It’s round and slightly rough to the touch, a tactile experience. It’s sat beside my keyboard for hundreds of thousands of words. I’ve cupped its reassuring bowl in my palms as I’ve stared disconsolately at the virtual page. It’s steamed gently beside me as I’ve researched, read, muttered to myself while staring at the walls. It really is an old friend. And now it’s broken. I know it was an accident, but I feel a terrible sense of guilt along with the loss at the moment. I loved that old mug, and I dropped it.

There’s a curl of mouse cord on my desk that looks so empty now. It’s where my mug would sit. I want another coffee, but I feel as though I can’t, there’s nothing to hold it. My wife remembers the market where she bought it for me and next time that market comes around we’re going to see if I can get another. But it will never be the same.

When I first reported this terrible tragedy on Twitter, Angela Slatter said, “Noo! Quick, dance widdershins around the remains then throw coffee grounds over your left shoulder to ward off bad writer hoodoo.”

To which my initial response was, OH MY GODS IS THAT A THING!?

So I’ve done that ritual now. You know, just in case. I’ll have to soldier on with a temporary mug while I try to deal with the loss. Today is a writing day. I’ve been for a run with my wife and dog, done some bits and pieces that needed doing and now I plan to keep my arse parked here until there are 5,000 new words on the novel in progress. I just hope I can do it without my old pal.

Vale, mug. You were one of a kind.