In Your Face – the genesis of my story, “Bodies Of Evidence”

One of the best things about slowly and steadily building a writing career is that you get to a point where editors come to you and ask for stories, based on their experience of your previous work. It’s incredibly cool, and really helps to remind a writer that all the hard work is worthwhile. Of course, there’s no guarantee that said editor will buy the story you send them – you still have to write something that blows their socks off. Well, in 2015 I was commissioned by three editors for stories, and I managed to sell to all three. I couldn’t be happier! In this post, I’m going to talk specifically about one in particular, a story for editor Tehani Wessley of Fablecroft Publishing, for her forthcoming anthology, In Your Face. A bit further down I’m going to talk about my story, but first you need to understand the idea of  the book.

In Your Face will be made up of original and reprinted speculative fiction stories that deal with very provocative themes. These stories will be provocative and/or confronting but with a firm purpose – they are pieces that will perhaps make readers uncomfortable because they are a bit too hard-hitting or close to the bone, but which interrogate these themes and ideas, and make a point about the world we live in.

The book is happening hopefully by April, and it’s going to be amazing. There’s a pozible campaign though, which aims to raise more money in order to buy more stories for the anthology and then, if it meets its stretch goals, pay its authors more. So that’s pretty awesome. The modest original target was met in less than twelve hours! But you can still get involved and use the campaign to pre-order your ebook or print copy at a discount, and claim other rewards. All the details here: http://www.pozible.com/project/202670

Now my story that will appear in In Your Face is a very personal one. When Tehani explained the book to me, I realised this was the opportunity to write a story dealing with something I’d avoided until now. I had an older brother, Steven, who was a great guy. But he was born with Duchenne Muscular Dystrophy, the most aggressive form of this progressive neuromuscular disorder, and he died when he was 18. I was 16. My entire youth was one where disability was front and centre of my life.

I knew I would address disability one day in a story, but not simply the nature of disability itself – I knew I needed to explore parallels between disability and deliberate body modification. The things people willingly do to themselves and the things people wish they could do. I knew it would be a difficult story to write and a difficult one to sell. When In Your Face came along, I realised the problem of selling it might be taken care of if I could do a good enough job of writing it. So that’s what I did.

It was one of the hardest things to write I’ve ever taken on. The framework is a cyberpunk noir story, with a protagonist who’s a career detective on a strange murder case. Her brother has a debilitating disease and not much longer to live. I don’t specify in the story that he has MD, but that was my model for the character’s situation. I’m not going to say any more about it, but now you know the genesis of the story. It’s called “Bodies Of Evidence” and I really hope people enjoy it. Well, maybe “enjoy” isn’t the right word. It’s an uncomfortable story to read, I think, but that’s the point really. I just hope I’ve done the subject justice. Time will tell. Tehani, at least, thinks I have, as she bought the story, so I’ll take that encouragement. And I really want to thank my friends Rob and Julia for their invaluable help beta reading this story for me.

There are some amazing writers lined up for In Your Face, so get over to the Pozible page and reserve your copy now. I think it’s going to be a very important book. 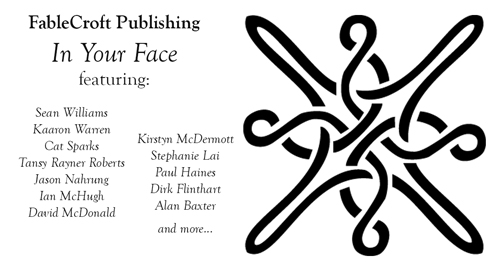