Emma Newman and Between Two Thorns

If you’re a regular here, the name Emma Newman probably rings some bells. It should, because she’s a mighty talented person and I’ve talked about her a bit. I was lucky enough to be asked by her publisher to pre-review and blurb her short fiction collection, From Dark Places. You can see that review here. I was also happy to host one of her Split Worlds stories here last year.

Well, now the Split Worlds has expanded into the first of a series of novels, published by Angry Robot Books, called Between Two Thorns. And the reason I’m talking about it now is because there’s a sweet little pre-order special offer happening.

Between Two Thorns is an urban fantasy novel. Here’s the blurb:

Something is wrong in Aquae Sulis, Bath’s secret mirror city.

The new season is starting and the Master of Ceremonies is missing. Max, an Arbiter of the Split Worlds Treaty, is assigned with the task of finding him with no one to help but a dislocated soul and a mad sorcerer.

There is a witness but his memories have been bound by magical chains only the enemy can break. A rebellious woman trying to escape her family may prove to be the ally Max needs.

But can she be trusted? And why does she want to give up eternal youth and the life of privilege she’s been born into?

Pre-order a copy of Between Two Thorns for a chance to win a great prize! 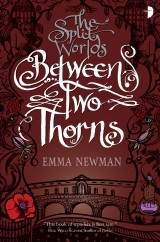 Pre-order a copy of Between Two Thorns and you’ll be entered into a prize draw. If you win, you’ll have a character named after you in All Is Fair – the third Split Worlds novel (released October 2013) – and a special mention at the end of the book.

You have to admit, that’s a pretty cool prize.

Pre-order a copy of the book from your favourite retailer (if you pre-order from Forbidden Planet you’ll get a signed copy).

If you order from Forbidden Planet or robottradingcompany.com (for ebooks) you don’t need to do anything else – Angry Robot will take care of your entry for you. If you pre-order from anywhere else you’ll need to email a copy of your order confirmation to: thorns AT angryrobotbooks.com and they’ll assign a number to you.

Here are links to all the places you can pre-order:

There are two UK launches and an international one using the magic of telephone conferencing. All the details are here: http://www.enewman.co.uk/real-world-adventures/between-two-thorns-launches-prizes-and-parties