I’m so excited to have signed on with Grey Matter Press once more, with the sequel to 2018’s novella, Manifest Recall. The sequel is called Recall Night and it’s the second in what we’re now planning to be an ongoing series of supernatural thriller novellas featuring haunted protagonist hardman, Eli Carver. Here’s the official press release:

Eli Carver, a mob hitman haunted by a checkered past, returns in Baxter’s next installment in his second fiction franchise when book two of the Eli Carver supernatural series, Recall Night, is released this summer by Chicago-based independent publisher Grey Matter Press (GMP).

In 2018, Baxter’s successful Manifest Recall struck a thunderous chord with readers who demanded more Carver, the anti-hero who captured the imagination of fans in the original genre-busting thrill ride of horror, noir and southern gothic. Expanding on the themes introduced in the first chapter, Carver returns from self-imposed exile in Recall Night to find himself embroiled in dangerous intrigue as he navigates the mystical world of ancient religion and deadly occult practices.

“I knew there was more to Eli’s story,” said Baxter, the critically acclaimed author of several novels, including the popular Alex Caine dark fantasy series, short story collections Served Cold and Crow Shine, and more than eighty works of short fiction published in venues worldwide. “When people kept asking for more after Manifest Recall, I was excited to revisit the character. I’m so pleased Grey Matter Press is along for the ride.”

With two chapters of the Eli Carver saga complete, Baxter intends to expand upon the character in additional chapters of this rapid-fire supernatural thriller series.

Final cover artwork for Recall Night will be revealed by the publisher in the upcoming weeks.

When Recall Night is released this summer, the title will be available from Grey Matter Press in both trade paperback and common ebook formats at booksellers worldwide. 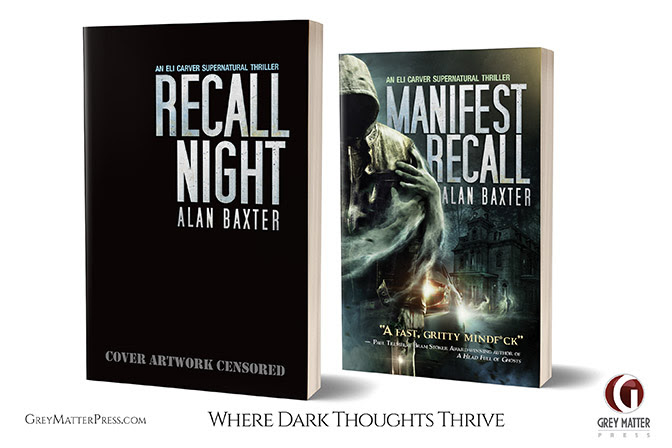