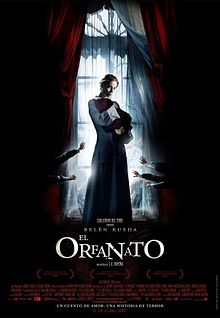 I’ve been a fan of Guillermo Del Toro for a long time and his films are usually well worth the time. In this case, the Pan’s Labyrinth director is a producer for director Juan Antonio Bayona’s gothic horror about an old orphanage that is being reborn under the care of an ex-resident. As a child, orphaned Laura lived in the big old house by the Spanish seaside and has fond memories of her time there. She was adopted and left the home. Now in her mid-30s, Laura returns to the dilapidated institution with her husband, Carlos, and their seven-year-old son, Simon, to reopen the orphanage for just a handful of special needs children.

But, naturally, there is something weird going on in the beautiful old house. Simon’s behavior begins to grow increasingly strange and Laura and Carlos start to think the boy is getting carried away with his imaginary friends. On the opening day of the new orphanage, Simon’s bizarre behavior is written off as a bid for attention until truly strange events occur and Simon disappears. The search for Simon leads Laura deep into her memories of the orphanage and she begins to uncover troubling things that occurred after her own adoption…

Read the rest of my review at Thirteen O’Clock.