Well, this past weekend the people of Australia gave John Howard a very well deserved kick up his lying arse and made it quite clear that we’ve had enough of him. Now the almost saint-like (if the media is to be believed) Kevin Rudd has a chance as our new Prime Minister. If he can lay off the ear wax, that is. Let’s see if he can even vaguely live up to what the populace now expects of him. 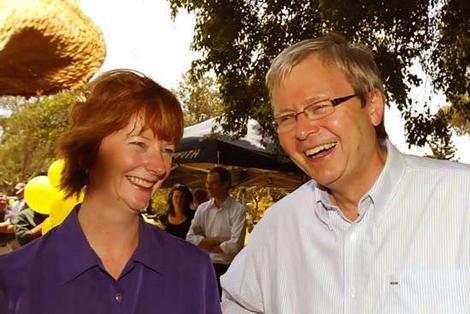 Now, here at The Word I’m always happy to help people better understand the everyday terminology that surrounds us and, quite often, baffles us. Within the murky world of politics, word abuse is rife and even the general terms can be twisted and misrepresented. With that in mind, and given the general air of political fever here at the moment, I thought it might be a nice time to share this email that was forwarded to me by a very good friend. It takes the complex issue of Political Economics and simplifies the concepts with the use of cows.

SOCIALISM: You have 2 cows, and you give one to your neighbour.

COMMUNISM: You have 2 cows. The State takes both and gives you some milk.

FASCISM: You have 2 cows. The State takes both and sells you some milk.

NAZISM: You have 2 cows. The State takes both and shoots you.

BUREAUCRATISM: You have 2 cows. The State takes both, shoots one, milks the other, then throws the milk away.

TRADITIONAL CAPITALISM: You have two cows. You sell one and buy a bull. Your herd multiplies, and the economy grows. You sell them and retire on the income.

Now for some international variations on corporate economy explained with the use of cows:

AN AMERICAN CORPORATION: You have two cows. You sell one, and force the other to produce the milk of four cows. Later, you hire a consultant to analyse why the cow has dropped dead.

ENRON VENTURE CAPITALISM: You have two cows. You sell three of them to your publicly listed company, using letters of credit opened by your brother-in-law at the bank, then execute a debt/equity swap with an associated general offer so that you get all four cows back, with a tax exemption for five cows. The milk rights of the six cows are transferred via an intermediary to a Cayman Island Company secretly owned by the majority shareholder who sells the rights to all seven cows back to your listed company. The annual report says the company owns eight cows, with an option on one more. Sell one cow to buy a new president of the United States , leaving you with nine cows. No balance sheet provided with the release. The public buys your bull. (Or THE ANDERSEN MODEL: You have two cows. You shred them.)

A FRENCH CORPORATION: You have two cows. You go on strike, organise a riot, and block the roads, because you want three cows.

A JAPANESE CORPORATION: You have two cows. You redesign them so they are one-tenth the size of an ordinary cow and produce twenty times the milk. You then create a clever cow cartoon image called ‘cowkimon’ and market it worldwide.

A CHINESE CORPORATION: You have two cows. You have 300 people milking them. You claim that you have full employment, and high bovine productivity, and arrest the newsman who reported the real situation.

AUSTRALIAN CORPORATION: You have two cows. Business seems pretty good. You close the office and go for a few beers to celebrate.

WELSH CORPORATION: You have two cows. The one on the left looks very attractive.