I mentioned a while back that I was embarking on a reread of Ursula Le Guin’s Earthsea novels. It was, in fact, only a part reread. There are six Earthsea books, that Le Guin likes to refer to as either the Earthsea Cycle, or the two Earthsea trilogies. Until now I’d only read the first trilogy. (There are also two short stories in the collection The Wind’s Twelve Quarters, but I’m not including those. I’ve got that collection and will get around to it at some point.) 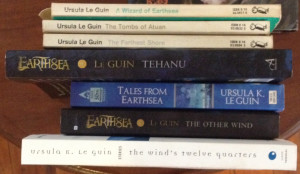 I came across the first trilogy – A Wizard of Earthsea, The Tombs of Atuan and The Farthest Shore – when I was 10 or 11 years old. I devoured them and absolutely adored them. They bent my tiny mind and I read them over and over again. I had no idea there were more books in the series (back then, there weren’t). The next trilogy – Tehanu, Tales of Earthsea and The Other Wind – came out much later. The first trilogy was published in 1968, 1971 and 1972. The second in 1990, 2001 and 2001, respectively. Having loved the first trilogy so much, it’s amazing it took me this long to get around to the second, but there you go. So I recently reread the first three and then went on to the “new” three.

Even though I’d read them so many times, it’s been a long time since I last read the original trilogy. I was desperately hoping it wouldn’t turn out to be a disappointment. Within a few pages, my fears were quashed and I was back in Earthsea and remembering just why I loved it so much. The writing is beautiful, so poetic and lyrical, evoking such a fantastic sense of place and character. Yet it’s also tight and spare, no flowering dissertations on every aspect of the story. These are 200 or 300 page novels that could easily be 500 page novels if Le Guin was prone to the “big fat fantasy” style so common today. But she’s not and it’s one of the things I like so much about these books. They’re perfectly sized stories, perfectly written. And the tales themselves are just as enchanting now I’m in my 40s as they were before I hit my teens. I can’t wait until my son is old enough to read them.

So then I was set to embark on the second trilogy for the first time. Would these disappoint? Could I be as charmed by a revisit to those classic novels? Well, yes, I could. In all honestly, I think I enjoyed the first of the new three, Tehanu, more than the others. But the set of six as a whole does a wonderful job of telling a huge story. Especially as Tales From Earthsea is a collection of short stories and novellas, all designed to fill in history and backstory of the bigger arc, yet all wonderful stories in their own right.

One of the most interesting things for me was an afterword by Le Guin in the last book, where she talks about the time spent writing these six novels and how she thinks it’s finished now, but never say never. Perhaps the most interesting part of that for me was that she didn’t really recognise the theme of the whole series until she was writing the last book. She realised what she was fundamentally writing about when she’d finished, not when she started. She began telling stories she was compelled to tell and let the underlying theme of her work worry about itself. I think that’s a great lesson for writers – don’t stress about what you’re trying to do or trying to say, as then you might focus too much on the message and lose the magic. Just tell your stories, and trust that whatever thematic form is squirming in your subconscious will find its way out over time.

Either way, I loved my return to Earthsea and it still stands as one of my favourite series of all time. Six wonderful books that I’m sure I’ll visit again and again.