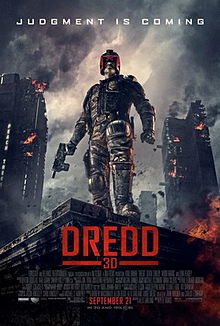 Dredd is the second attempt to make a movie from the incredibly enduring 2000AD comic strip, Judge Dredd. The last attempt, with Sylvester Stallone in the title role, was such a smouldering pile of crap that I refuse to say any more about it. Does the new version make up for that? Actually, yes it does.

Dredd is the story of a future Earth where nuclear holocaust has reduced the vast majority of the planet to radioactive wastelands full of mutants, generally referred to as The Cursed Earth. The surviving, unaffected members of humanity live in massive, sprawling cities that cover thousands of square miles, called Mega-Cities. The biggest of these, covering the vast majority of the east coast of the US and home to some 800 million people, is Mega-City One. Most people live in Blocks, mega structures of some 200 stories each. As you can imagine, people crammed in those kind of numbers into that kind of space means crime and violence are everyday dangers. The only line between the people and utter chaos are the men and women of the Hall of Justice, known as Judges. They are judge, jury and executioner, dispensing justice and sentence wherever they go. Of all the Judges, Judge Dredd is the Judgiest. An absolute law man, with a perfect working knowledge of every aspect of Mega-City One’s fascist and brutal justice code and a black and white eye for resolution.

This is a world and a society that has grown incredible detail over the decades, so to tackle the subject in a single 90 minute film is daunting, to say the least. The makers of this film, however, were smart and, after some opening sequences through Mega-City One, they locked two judges in one block and the rest of the film played out there. It’s the story of one particular crime boss, known as Ma Ma, and her control of the new drug Slo-Mo. When you take Slo-Mo, you perceive the world as passing at 1% its normal speed, which gives the filmmakers an excuse for some awesome and beautiful super slo-mo sequences. Also some truly brutal ones, but we’ll get to that.

Judge Dredd is saddled with a new rookie judge, Anderson. The rookie failed her test to become a judge, but only just. She does, however, have a pretty powerful psychic ability and the Chief Judge tasks Dredd with taking her out for a day’s assessment to see if the slight fail can be ignored if Anderson’s psychic abilities prove her to be a good judge on the streets. On investigating a triple homicide in Peach Trees Block, they find themselves trapped in Ma Ma’s web and the crime boss seals off the block with war protocols and orders everyone inside to find and kill the judges. Thus begins a Die Hard-esque fight for survival while Dredd and Anderson try to stay alive and dispense justice.

Seeing as I’ve been a fan of Judge Dredd since before my age hit double figures, I was scared about how faithful to the comics this film would be…

Read the rest of my review at Thirteen O’Clock by clicking here.