Dreaming in the Dark kicking ass 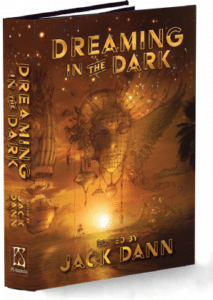 You guys know all about this anthology, right? If not, you should. It’s an amazing book, edited by the incredible Jack Dann. It features an array of amazing stories from some of Australia’s most talented writers. And one from me! My story, “Served Cold”, is included and I think it’s one of the best stories I’ve written so far. But don’t take my word for all of this. The reason I’m writing about it again now is because Dreaming in the Dark has just been nominated for the World Fantasy Award for Best Anthology. But that’s just the most recent. It was also nominated for the Australian Shadows Award and the Aurealis Award and it won the Ditmar Award. Loads of the stories included have been nominated for or won awards (my own story, “served Cold”, was nominated for the Australian Shadows Paul Haines Award for Long Fiction and the Aurealis Award for Best Horror Novella).

So you see, this book is amazing and it’s kicking ass. And it’s published by PS Publishing, which means it’s a beautiful hardback artifact too. There’s also a limited edition run of just 200 copies that are numbered and signed by all contributors, so look into that. All the details are here. So yeah, get yourself across this book. It’s amazing.