Dreaming In The Dark is coming! 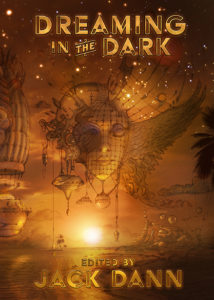 So this is a book I’m really excited about and so proud to be in. Jack Dann is a legend in the field, someone who has been around and influential for decades. His own work as an author is stunning, and his work as an editor is globally lauded. He’s done a couple of “Dreaming” anthologies before (Dreaming Down Under and Dreaming Again, which you really should check out) so this is a bit like the third in an unofficial series. And check out that cover!

A celebration of Australia’s current Golden Age of science fiction, fantasy, horror, and magical realism. Jack Dann—the multi-award-winning author and co-editor of the classic Dreaming Down-Under, the anthology that “has been credited with putting Australian writing on the international map” and the first Australian book to win a World Fantasy Award—has collected a wonderfully eclectic range of short fiction that showcases what our best fantasists are doing right now at this genre-bending moment in time.

I think this is going to be one of those books that gathers heaps of attention, and with the list of authors included, it really should. Honestly, I’m humbled to be among them. Here’s the full table of Contents (not in final order):

Welcome to the Golden Age: An Introduction of Sorts—Jack Dann

See what I mean? What a book. It’ll be coming out initially in two special editions, an unsigned jacketed hardcover (ISBN 978-1-848639-68-3) and a limited edition of 200 slip-cased jacketed hardcovers signed by all the contributors (ISBN 978-1-786360-17-5). I’m guessing an ebook and paperback edition will be coming at some point after that. All the details can be found at the publisher site here, PS Publishing. It’s out next month, so watch this space. Full wrap cover below (click for large view).