Why do there have to be dragons? – Guest post from Donna Maree Hanson

Canberra writer, Donna Maree Hanson, has a new book out. It’s called Shatterwing (which is a sweet title, if you ask me) and is the first in her Dragon Wine series. As you can probably tell, it’s fantasy and has dragons in it. It’s actually a dark fantasy, and here I have Donna talking about just why there are dragons in it. Take it away, Donna. 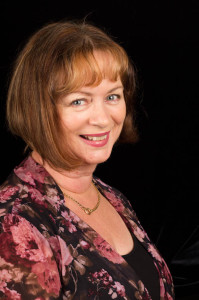 I’ve recently had the first book in my series, Dragon Wine, published. The first book is Shatterwing (Sept 14) and the second book Skywatcher (Oct 14) out with Momentum books. As you can tell from the series name, there are dragons in the story and it’s a dark, epic fantasy set on a secondary world called Margra.

I’ve not been particularly fond of dragons in the past. I’ve not read a lot of fiction with dragons. So I ask myself why does there have to be dragons in the Dragon Wine series.

I go back to the beginning. I was working on my small vineyard, checking the grapes, spraying them with sulphur (as you do) and slowly the opening scenes came about. The scene where there are grapes and dung and the odour of sulphur and dragons riding the thermals overhead. Salinda was tending the vines as I was, but in her case it was a prison and the wine had magical properties and the vines were growing in dragon dung, an excellent fertiliser.

Dragons were naturally a part of the world of Margra that I didn’t think twice about it. However, just last night I was talking about the dragons and I really couldn’t answer the question: ‘why dragons?’ ? I didn’t put the dragons in there on purpose, they were just there. I throw up my hands. You get it don’t you?

I know some readers love them and others hate them. I can’t win there. To me they are just part of the landscape, the world and the situation that I didn’t give them a second thought.

This probably gives you a hint about the world building. I didn’t sit down and plan it all out. It evolved with the writing process and with time. That’s what I love about this series, the rich history, the post-apocalyptic trauma to the landscape, the people and even the heavens. The dragons came there when the world split and answering the mystery of why, where and how will be something to be explored during the course of the series.

That is the fun part of writing for me. Getting in there and exploring the world, imagining new histories and backstories and puzzling out the future.

Also, the dragons are physically large and threatening and have a power of their own. I imagine that they think of us humans as transient things, a sort of food, a mild annoyance and not very interesting. I believe they have a very strong connection to the planet, but who knows.

Dragon Wine Book 1 : Shatterwing is available from all major ebook retailers or direct from the publisher.

Dragon wine could save them. Or bring about their destruction.

Since the moon shattered, the once peaceful and plentiful world has become a desolate wasteland. Factions fight for ownership of the remaining resources as pieces of the broken moon rain down, bringing chaos, destruction and death.

The most precious of these resources is dragon wine a life-giving drink made from the essence of dragons. But the making of the wine is perilous and so is undertaken by prisoners. Perhaps even more dangerous than the wine production is the Inspector, the sadistic ruler of the prison vineyard who plans to use the precious drink to rule the world.

There are only two people that stand in his way. Brill, a young royal rebel who seeks to bring about revolution, and Salinda, the prison’s best vintner and possessor of a powerful and ancient gift that she is only beginning to understand. To stop the Inspector, Salinda must learn to harness her power so that she and Brill can escape, and stop the dragon wine from falling into the wrong hands.