Doctor Who the 11th

I admit that I was cautious in my excitement about the new series of Doctor Who. When the series rebooted with Christopher Eccleston back in 2005 I was very excited and the series took off with just the right blend of old school cheesiness and modern technology (in the form of CGI and so on) that my love for Dr Who was both nostalgic and reinvigorated. When Eccelston took an early bow after so little time in the role I wondered if that would be the end of it. Was it a moment of magic and Dr Who was now heading down the gurgler again?

Then David Tennant took over the role. My concerns quickly gave way when I realiased that this was a man born for the role. Tennant absolutely owned the Doctor and very nearly toppled Tom Baker as the best Doctor ever (in my humble opinion). I can’t really think of Tennant as better than Baker, because Baker was just nutso and had such a massive influence on my early years behind the sofa. But they certainly share the top spot. And Tennant was in the role for a long time. Basically the same amount of time as Baker. They are, without a doubt, the embodiment of the very concept of Dr Who – Baker in the innocent 70s and Tennant in the decadent 00s. 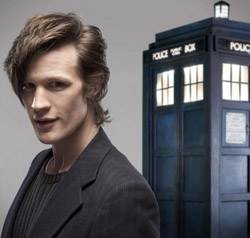 I was sad when Tennant announced he was leaving the role and I was then concerned when I saw the first pictures of Matt Smith, touted to play the 11th incarnation of the good Doctor. Nothing against Smith himself, I didn’t know him as an actor, he just seemed a bit out of context. But still photos will always do that. And he seemed too young. But maybe I’m just getting older.

And so it was with great trepidation and excitement that I sat down to watch the new Doctor Who this weekend. There’ll be some spoilers following, so beware if you haven’t seen it yet.

The program opened with the newly regenerated Matt Smith Doctor desperately trying to save an out of control TARDIS. In many ways this hectic, slapstick opening, with the Doctor hanging out the door of the TARDIS as it barrelled over London at night, had me suspicious. This was all a bit too children’s cartoon for my liking. But Steven Moffat has replaced Russell T Davies as head writer, I kept telling myself. While Davies did a sterling job, it was Moffat that wrote all the standout episodes recently (The Girl in the Fireplace, Blink, Silence in the Library/Forest of the Dead, The Time of Angels/Flesh and Stone). Although, to give Davies his credit, he wrote some blinders too, like Turn Left. I’m digressing here, but while we’re on the subject, I still reckon that The Satan Pit/The Impossible Planet written by Matt Jones was one of the best episodes of the new Doctor Who series so far.

Anyway, my point is that we should be able to trust Moffat not to fuck up the story on the first outing with a new Doctor. We need something other than a runaway TARDIS. But Moffat comes through. The TARDIS crash lands in a suburban garden, the Doctor meets a sassy young girl and talks to her about the voices in her room and promises he’ll be back in 5 minutes once he’s stabilised the still repairing TARDIS. Of course, he returns 12 years later and the kid has some issues. Thankfully the police uniform she was wearing was supposed to be fake, as my wife was getting quite upset about the mini skirt and clearly fake police radio, and we discover that young Amy Pond is a kissogram. I thought it was a bit risque to have her as a stripper, which was my guess on the mini skirt policewoman thing, given the family target audience of Doctor Who, so downgrading that profession to kissogram is actually kinda sweet.

Matt Smith has oodles of Doctory presence. I think the bar was set in the mid-70s when Tom Baker brought a certain lunacy to the role. The three incarnations before him had been rather more severe and serious characters and Baker lightened it all up a bit. He set a benchmark and every Doctor since has seemingly emulated that in some way. I think Tennant did an excellent job of portraying just what sort of personality a 900 year old genius would have and Matt Smith, in this first episode, does a cracking job of reviving Tennant’s persona while slathering on enough of his own personality to take ownership of the role. My concerns about how unnatural he looked in the stills and my concerns about his age were quickly dispensed. I reckon this Matt Smith fella is going to do a good job. 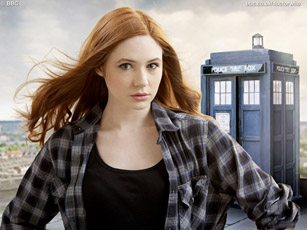 And I’m already a fan of Amy Pond, and not just because she’s a looker. I like that her character has a clear backstory that we want to know about. What happened in that 12 years? Why is she still in the same house? She’s already a character with mysticque and I trust Moffat to develop that well. I’m slightly concerned that she leaves with the Doctor the day before she’s supposed to get married, as is implied at the end of the episode. That could turn out to be a bit of a tacky and heavy idea to work around. We’re presumably left to believe that she’s settled for this dweeby guy, Rory, that we get a brief look at during the episode. He’s a helpful and friendly enought bloke, but he’s clearly a “bumbling fool” character. Why would a headstrong girl like Amy settle for anyone? Hopefully that will be well answered and not turn out to be a weak point in her character. I believe Rory is going to be a repeating character and there’s a danger of the Amy/Rory thing being a bit close to the Rose/Mickey thing from before. We’ll have to wait and see.

Anyway, the net result of all my rambling is that I think Moffat has started this new season and this new Doctor with a great story – classic alien killer hiding out on Earth scenario – and the new Doctor and assistant are both taking their roles by the horns (do roles have horns?) and look like they’re going to do a sterling job. I loved how the Doctor called the aliens back just to say, “Right, take a close look at me. Got it? Good. Now run away!” Brilliant.

My excitement is reinvigorated once again and I can’t wait for my weekly fixes of the Doctor. Long may he continue to travel through time and space and into our living rooms.