Continuum 5 Galaxies By Gaslight – the report

I’m very tired today. It’s been an excellent weekend, but tiring. This is because I flew down to Melbourne (boy, are my arms tired… boom-tish) for the Continuum convention, Galaxies By Gaslight. There was a general steampunk theme to this fifth Continuum and it was a lot of fun to be involved in. I’ll write a bit about it below and be sure to click on any linked names you see and you’ll learn about some great SF writers.

The general mood of the con was quite quiet and calm. It wasn’t ever really packed and many of the panel audiences were small, but everyone was in good spirits, there was a great sense of friendliness in the air and lots of socialising going on.

I sat in the audience this weekend on a few other very interesting panels. One on time travel in fiction was good fun, with the general consensus being that any time travel tends to really fuck up a good story 99% of the time, with a very few outstanding exceptions. Of course, it’s worth it for those exceptions, but anyone writing yarns with time travel in them needs to be very careful. That panel also pointed out to me that I’m about the last human left on earth still watching Lost. Apparently everyone else has given up on it.

Good fun was had by all as far as I can tell. One of the strangest things that happened to me was in the dealer’s room on the Saturday afternoon. I stopped by one table to look at some comic collections by a guy called Jenner. They’re medical based comics, with animals as the stars. Jenner is also a doctor and writes and draws these comics from his experiences with patients and staff. It started as a small habit for medical publications, grew into a web comic and now he sells them in books too. Why was this strange for me? Well, while I was browsing he kindly offered to draw a caricature of me for free while I checked out his books. Who can turn down an offer like that?

So here it is: 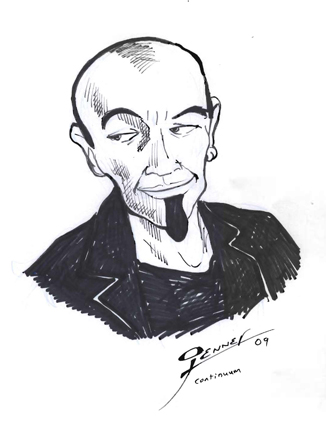 I think it’s very good. And not entirely unlike the author photo I usually use (the one in the banner at the top of this site). You can find Jenner’s cartoons here.

The next con on the agenda is Conflux 6 in October. See you there.