I’m home from Conflux 12, my first as an official Guest of Honour, and what a wonderful con it was. I haven’t missed a Conflux in years, because it’s always great and has long been my favourite Aussie convention. So of course, to be the GoH there was a double treat. So much happened, I won’t be able to record it all, but here’s a bit of a run down on my experience of events. 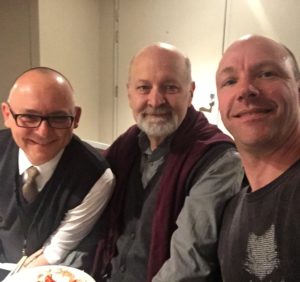 The MC was the awesome Sean Williams, and the international guest was David Farland (he of the Runelords series and so much more, who you may also know as David Wolverton, the name he uses for his science fiction novels). The picture to the left there shows (left to right) Sean Williams, David Farland and myself, taken at the con banquet on the Saturday night. Both Sean and David were brilliant. I really enjoyed David’s interview, conducted by Tim Napper. David has been in the business for a long time and is a really heavy hitter (he’s the reason Harry Potter got as big as it did). His insights and experiences were fascinating.

There were numerous panels over the four days, covering a wide variety of topics. The theme of the con, based on the year in Chinese astrology, was Red Fire Monkey, so a lot of stuff was based around that. A lot of Asian-influenced SF was discussed, which is great because it’s a largely un-mined source of great fiction in the west.

One of the real high points for me was the launch of my first collection of short fiction, Crow Shine. The amazing and completely lovely Kaaron Warren was kind enough to launch for me and she said such great things about the book. I made some souvenir “moonshine” for the event that we all used to toast the launch and I sold a bunch of books. Hopefully people will enjoy the read. The book is officially released (in hardcover and ebook along with the paperback you see below) in November, so watch here and my social media for details as they come about. Here’s Kaaron and I right before things got under way. 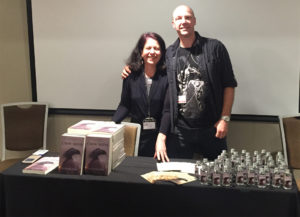 Another high point for me was my Guest of Honour Q&A, with horror master Robert Hood interviewing me. It was a really interesting hour, where Rob’s questions had me interrogating myself and my ideas around horror and dark fiction quite deeply. I enjoyed it a lot. And when Rob opened the floor to questions, he insisted that anyone with a question take Eric the Monkey (a plushy toy monkey with an evil gleam in its eye) and try to hit me with it while I was answering. One shot got through, with Ian Nichols tossing a monkey with more velocity than I expected it capable of! I saw the shot coming and got a hand to it, but just deflected it into my own head due to the unexpected pace. The pic below shows me and Rob mid-discussion. That bastard monkey, Eric, is just out of shot to the left, waiting for his moment to shine. 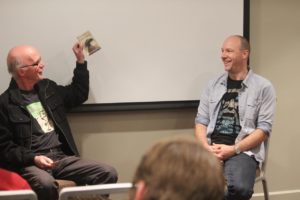 And I think the other thing that really deserves a mention is the Sci Fi Tai Chi! As part of his MC duties, Sean Williams devised a new short form of “tai chi”. Most tai chi styles have moves with poetic and descriptive names, so Sean decided to develop a science fiction version, with each move referencing some SF or fantasy movement known to all fans. He taught a few moves at each significant con event, and I had the obliging Dave Versace video the final lesson from the closing ceremony, where Sean demonstrated the last three parts. I joined him in learning and demonstrating the “Sean Williams Sci Fi Tai Chi Form” and here it is on YouTube. For reference, the moves are:

So that’s my short wrap of Conflux 12. Already, I can’t wait for Conflux 13 next year. As ever, Cat Sparks was roving around all weekend with her camera and her full photoset of the con is on Flickr here. If you can ever get to Canberra in early October for a Conflux, you won’t regret it.