CI-A, Me and the Battle of the Worlds

I was looking through some old stuff my mum had saved and discovered a bunch of old exercise books. Most of it is pretty rubbish, appalling “religious education” that was nothing but Christian indoctrination and so on. In truth, I always hated school, never got on well with a classroom environment, with one exception: I loved English. The chance to write stories and read books? That was my kind of schooling. It’s the only thing I was ever good at, academically, so it’s no surprise that these days I’m a writer and a martial artist.

I remember my first ever experience of storytelling. I was about seven years old and we were told to write a story about what we did on the school holidays. Most kids came back with paragraph or two about nanna’s house or whatever. I came back with seven or eight pages about a dude who went back in time and got chased around by dinosaurs. The teacher didn’t believe I’d written it and rang my parents. They said they had no idea about it, I must have done it all in my room. So my teacher, duly impressed, got me to read it to the class. As I stood up there with my knees trembling, reading this thing, I realised all the faces were enraptured. After class, kids were coming up to me saying how great it was and how they wished it wouldn’t end. I was amazed. I had discovered the power of storytelling. I never looked back.

Sadly I can’t find that time travel story I remember so well. Maybe I will one day. But I have found other stuff. One was a story I wrote when I was nine years old, and it shows my influences so clearly already. There’s science-fiction, horror and fantasy, shameless pillages from Star Wars and Doctor Who. It’s classic early Baxter. So I decided to transcribe it for posterity here. Below you’ll find the story, accurately transcribed with all my spelling errors and so on included. But I have added paragraphs. Seems I had a thing about not using them – lots of other stories in big blocks of text with my teacher getting more exasperated about it every time.

After the transcription are scans of the original pages with my teacher’s notes. Perhaps my favourite thing about this story is the teacher’s comment at the end:

“Very good, Alan. I think you enjoyed yourself too. 1 house point.”

You’re right, teacher. I really did enjoy myself. And I still do – nothing is more fun than writing stories. And I scored a house point! That was a big deal back then. Anyway, don’t expect anything brilliant, but here I present to you:

CI-A, Me and the Battle of the Worlds

(A story from California)

“No I won’t let you lie in I’ve gotta catch my breakfast.”

“bleep bleep or not I want my breakfast. Look CI if you get up you can have some of your favorite drink.”

“Yes oil. Now you get up while I catch my breakfast.”

“Yes you can pour your own.”

“My god CI is this the right planet?”

“Com’n CI I’m gonna get to the bottom of this.”

“What the heck are dincas”

“Stop calling me master will you. Suffering sausages are they the dincas.”?

“HECK, their just the daleks CI.”

“Athermative they are the second type of daleks.”

“Second type would they attack us”?

“Athermative. But I could fight back with my lazers beams.”

“All right I heard you the first time. But you couldn’t fight all of them theres dozens of them you’ve only got 7 lazers.”

CI gave a loud whistle and hundreds of CI-A’s came zooming in.

All the CI-A’s went zooming off fireing their lazers at the DINCAS. After a long and very noisey fight the DINCAS were all destroyed and not one of the CI-A’s.

“Well thanks CI you and your brothers sure did destroy them.”

We all helped build a new space station and after 2 ½ years the new space station was built. CI interduced me to his best friend. I made friends with him and he was called 8-9-Z CI-A 8-9-Z and I lived on the planet for a couple of years and then we had a spacestorm on the part of the planet where we were. A space storm is very colurful, but very dangeous aswell. It is a storm of colured lazer beams. One of the beams hit our ship so the robots and I could not get home.

When the storm finished we all went out to look at the ship to see weather it was re-buildable or not. We were all dissapointed. “O well you two we’ll have to start building one from scratch. After 6 months we had finished building it and 8-9-Z, CI-A and I flew home only to find that the dreaded wherewolf had attacked the village. There were dead people lying everywhere. O well here we go again another adventure to sort out. Just then CI-A sent up a rocket jet flare and all his brothers came down in their space-ship to help us out again. All CI’s brothers and sisters said that they had brought some equitment for catching wherewolfs. That made me pleased because it would make it easier to catch it. Just then there was a low growl.

Cis brothers went forward to attak but they retreated when they saw how huge the monster was.

“Look at the size of it CI is that the one that attaked your planet last month”?

“Holy mackeral its eating the houses”

“He is using the water of life to bring the dead people to life.”

Just then the wherewolf came into full view of us CI-a swung round and fired all 7 lazers at it. It fell down dead and 8-9-Z CI-a and I put it in a little rowing boat and sunk it so all Cis brothers went home and CI 8-9-Z and I could settle down to a happy life again. 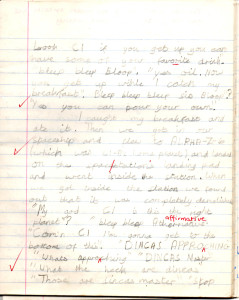 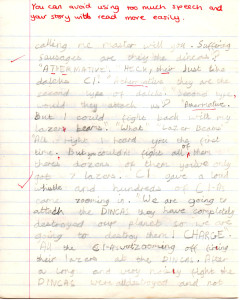 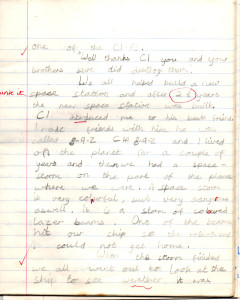 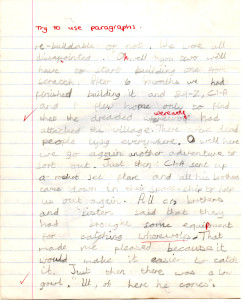 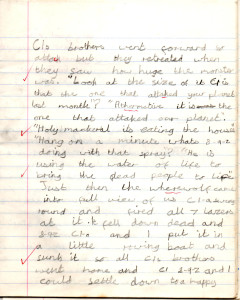