I read about this today over at David B Coe’s weblog. It’s truly astounding. Various churches around the world never cease to amaze me with their antics, but this is one of the best ones for a while.

Author Jeremy F Lewis wrote a novel called Staked. The book deals with vampires and werewolves and all sorts of murder and mayhem. And love finally triumphing over all I expect. That’s pure speculation on my part, but it fits the paradigm. 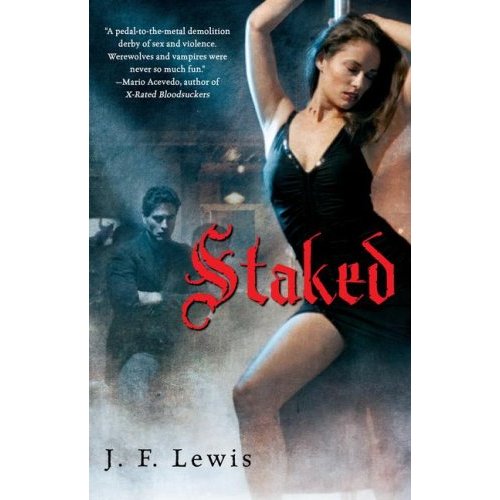 Anyway, Jeremy’s non-denominational church (<– oxymoron alert) has decided that, according to the author himself, ‘by writing the book, I committed the sins contained within it. They also felt that I’d aimed the novel at young children (which boggles the mind) and that it teaches and encourages the use of vulgar language. Though I disagree wholeheartedly with their decision, I can’t really say they took the action they took in order to be mean… they appear to have been acting out of genuine concern.’

Sure, it’s probably not meanness. It’s astoundingly stupid and self-righteous. The church actually told Jeremy to renounce his book and stop promoting it and, when he refused, they “withdrew fellowship”. Jeremy says that this wasn’t exactly excommunication but it amounts to pretty much the same thing.

Unbelievable holy bullshit strikes again. The most vocal religious people really are the worst marketing team for religion. David Coe says on his blog “out of respect for Jeremy and consideration of the church itself, I won’t publish the church’s name here”. Well, I wish I could find out what church it was, because I’d happily name the idiots. You would think a church, based on the “teachings” of the most successful fantasy novel of all time, would recognise fiction. Then again, maybe that’s exactly the point. They obviously don’t. In the same way that Jesus really did rise from the dead and absolve us of our sins, Jeremy Lewis really is a foul mouthed, sex crazed vampire that fights werewolves. Or something.

Anyway, the upshot of all this, of course, is publicity that Jeremy Lewis could never have dreamed of. Once again the church manages to achieve exactly the opposite of its aims. I’d never heard of Jeremy Lewis before, or his novel Staked. Now I’m very well aware of it and so is everyone else thanks to the wonderful power of the internet. Way to go, Jeremy – I hope you sell a million books on the back of this. And who would want to be a member of such an idiotic organisation as this “non-denominational church” anyway.

Here is Jeremy’s website and here is Staked at Amazon.