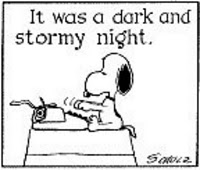 The Bulwer-Lytton Fiction Contest is one of my favourite literary events. It’s a brilliant idea. It stems from the awful writing of Edward George Bulwer-Lytton. You probably think you’ve never heard of him. But I can almost guarantee you have. Here, see if this is familiar:

“It was a dark and stormy night;”

“It was a dark and stormy night; the rain fell in torrents–except at occasional intervals, when it was checked by a violent gust of wind which swept up the streets (for it is in London that our scene lies), rattling along the housetops, and fiercely agitating the scanty flame of the lamps that struggled against the darkness.”

It’s writing like that which gave rise to the contest. During his studies Professor Scott Rice of the English Department at San Jose State University unearthed the source of that famous line, “It was a dark and stormy night”, as being the opening of the Edward George Bulwer-Lytton novel, Paul Clifford. And it is a very famous line. After all, Snoopy uses it all the time and that Beagle knows his shit.

For all his hideous writing skills, Lytton coined some phrases we all know well. Among them “the pen is mightier than the sword”, “the great unwashed”, and “the almighty dollar”. He’s had an impact, has Bulwer-Lytton.

So Professor Rice, with the help of San Jose State University, has, since 1982, put together the contest which seeks the worst opening lines to the worst of all novels. You can learn all about the contest here: http://www.bulwer-lytton.com/

Meanwhile, the 2011 results are in. The winner this year is the shortest entry to ever win the contest. It comes from Sue Fondrie of Oshkosh, WI. (Yeah, I thought that was a children’s clothing line for people with more money than sense, but apparently it’s a place too.) Here’s the winning line:

Cheryl’s mind turned like the vanes of a wind-powered turbine, chopping her sparrow-like thoughts into bloody pieces that fell onto a growing pile of forgotten memories.

Rodney Reed of Ooltewah, TN takes out the runner-up prize with this one:

As I stood among the ransacked ruin that had been my home, surveying the aftermath of the senseless horrors and atrocities that had been perpetrated on my family and everything I hold dear, I swore to myself that no matter where I had to go, no matter what I had to do or endure, I would find the man who did this . . . and when I did, when I did, oh, there would be words.

There are other winners in several categories (Adventure, Crime, Sci-Fi, Vile Puns, etc.) and they’re all listed on the contest site here. Go and have a read. They’re hilarious.