Bound – This is the really real world! 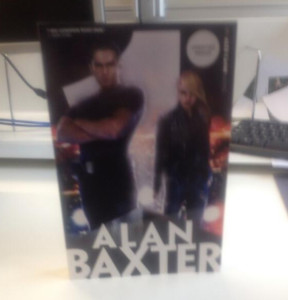 So HarperVoyager AU tweeted a blurry image today of the proof copies of Bound, Book 1 of The Alex Caine Series. The proofs have just arrived in the office there. It’s really real. Look! It’s an actual freaking book right there in the picture in the really real world. To say I’m a bit excited about this is like saying the Catholic Church has a couple of bucks stashed away for a rainy day. In other words, it’s a celestially massive understatement. It’s really actually happening, you guys. This also constitutes a sneaky little cover reveal for the first book.

I’m glad it’s a bit blurry because, as far as I know, there are going to be a couple of small artistic tweaks to the cover yet before the final version that will officially go to print. Plus it maintains a little but of mystery. It’s quite normal for advanced copies like these to have a few small last minute changes, as I understand it.

But I can tell you that the next two books will have covers like this one, obviously with a 2 and a 3 in the background respectively, with variations in the distance background and in the character poses, but all three make a kind of connected triptych design. Honestly, how cool is that? For anyone wondering, the title, Bound, is big and clear on the spine. I should be getting a copy of this proof myself this week, so I’ll post another picture of it then. Probably with my maniacally grinning face right next to it. Now scuse me while go Snoopy dancing.

EDIT: HarperVoyager posted a better picture, so I’m sharing that too. 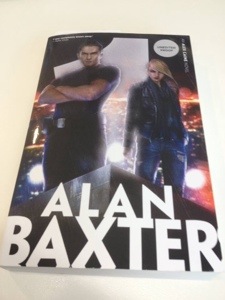