To help people learn a bit more about it, I’ve arranged for each fiction contributor to answer the same five questions, and I’ll be running these mini interviews every weekday now that the book is available. (And yes, I have a story in it, so I’ll be interviewing myself too!)

But first off, I have the same interview (with a slightly different first question) from the editor himself. So without further ado, introducing: 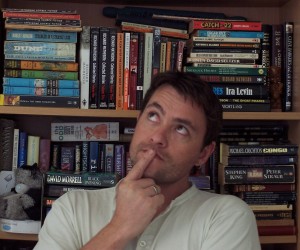 Marty Young is a Bram Stoker-nominated and Australian Shadows Award-winning writer and editor, and sometimes ghost hunter. He was the founding President of the Australian Horror Writers Association from 2005-2010, and one of the creative minds behind the internationally acclaimed Midnight Echo magazine, for which he also served as Executive Editor until mid-2013.

Marty’s first novel, 809 Jacob Street, was published in 2013 by Black Beacon Books, and won the Australian Shadows Award for Best Horror Novel. His novel was also given an Honorable Mention in Shelf Unbound’s Page Turner competition. His short horror fiction has been nominated for both the Australian Shadows and Ditmar awards, reprinted in Australian Dark Fantasy and Horror (‘the best of 2008’), and repeatedly included in year’s best recommended reading lists. Marty’s essays on horror literature have been published in journals and university textbooks in Australia and India, and he was also co-editor of the award winning Macabre: A Journey through Australia’s Darkest Fears, a landmark anthology showcasing the best Australian horror stories from 1836 to the present.

When not writing, he spends his time in the deep dark jungles of Papua New Guinea as a palynologist, whatever the heck that is.

1. What was your guiding framework for selecting stories for BtL? Did you have any methodology in mind?

I wanted to be taken somewhere uncomfortably real. Now I know the idea of all horror stories is to do that, to make you believe or to at least give you believable characters in an unreal situation, but there were some tales I rejected because they were just too far out there for what I had in mind (for example, set on another planet, or with humans integrated with monsters in society). I wanted the events in the story to seem like they could have come from a newspaper, but then I also wanted strange and surreal things to happen so it was a fine line to walk. Our world remains a mystery, despite all we know about it, and I wanted the stories to reflect that.

I also wanted these stories offset against non-fiction material. Some people might not get why non-fiction is included, or find this jarring, but it was an attempt at trying something a little different to what is standard practice. For me, it’s one thing to suspend belief for a story’s sake because you know, deep down, that what you’re reading isn’t real, no matter how realistic it might be. That’s the whole fun of horror fiction, right? It’s a safe scare. But it’s something else altogether to read details of actual real events or technological breakthrough that defy belief or cause you to question the world. So as per the title, I thought it would also be fun to take this a step further and blur the two, so some of the short stories are based on real events, while some of the non-fiction is made up. It’s up to the reader to work out which is which.

Horror to me is an emotional reaction to a horrifying event or situation. It’s something personal, hence why one person will call a book horror while someone else won’t. The genre is a nebulous beast, with horror being found in all kinds of books. We’ve come out of the ghetto and infiltrated the world; people read horror now without even realizing it, and then still claim it’s not a genre they like. In some ways, I think calling horror a genre isn’t accurate anymore. Maybe there’s a core element of horror that’s still there and easily classified as such, but there are certainly no boundaries anymore.

Phew, tough question, but one that comes to mind is ‘The Monkey’s Paw’ by WW Jacobs. The ending is just so perfect and terrifying. Another that I love for is surreal creepiness is ‘The Wendigo’ by Algernon Blackwood. Or for something a little different but still just as horrifying, ‘I Have No Mouth, and I Must Scream’ by Harlan Ellison. Absolutely brilliant.

Mine! No? Okay then, I’m going to go for Clive Barker’s Weaveworld for it’s poetic language, the staggering scope of its imagination, and the horror contained within. It’s one of my all time favourite novels. Beyond that, any of Stephen King’s books (especially his earlier ones). Not very original of me picking King and Barker, but I grew up with those two and they have had a heavy hand in shaping my writing.

I believe in monsters – except for me monsters are just animals we’re yet is formally discover and classify. I believe we will soon enough create AI (and then find ourselves in trouble). I believe in aliens, and I believe in the power of the mind.

I’m not sure I believe in alternative dimensions, even if they have been proven mathematically. I’m also not sure I believe in ghosts, hence why one of my hobbies is ghost hunting. I’m a scientist so of course I need proper indisputable evidence to prove their existence before I’m happy to believe. Do other supernatural entities exist? Fairies and demons and vampires and werewolves, etc.? I don’t know but I hope that they do.