To help people learn a bit more about it, I’ve arranged for each fiction contributor to answer the same questions, and I’ll be running these mini interviews every weekday now that the book is available. (And yes, I have a story in it, so I’ll be interviewing myself too!) 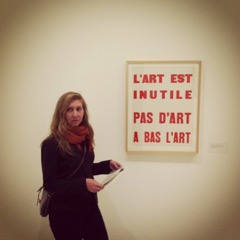 Lia Swope Mitchell is a PhD candidate in French literature at the University of Minnesota who writes fiction in moments of furtive, joyful procrastination. Her stories have appeared in Cosmos, Apex, and decomP, among other places. She teaches grammar, studies weird old books from the nineteenth century, and lives in Minneapolis.

My dad and his wife spend a good bit of time in New York, and a while ago they were telling me about this thing that apparently everyone learns if they ride the subway a lot: if it’s rush hour and every car on the train is packed except for one that looks totally empty… don’t get on the empty car. There’s a reason it’s empty. And the reason is probably someone who’s having one of the worse days of their life. “We can pray for him,” one woman said about an especially pungent man who was peeling the skin off his feet, “but we don’t have to smell him.”

That phrase—don’t get on the empty car—got me thinking about how people often try to close off and isolate things that disturb us. Maybe because they smell bad, but also because they’re sad and difficult and we don’t know what, if anything, we can do about them. So the story “Empty Cars” is about someone who’s trying to close off one particular thing, something difficult and sad that she wants very much to ignore, and the result is that it ends up invading her daily life in all these comically grotesque ways.

For me, horror is a lot like science fiction and fantasy in that it offers a perspective that we can’t get in everyday life, or at least not without some terrible consequences. Horror in particular is a way to explore all those weird and awful beings, ideas and fantasies, to see the world from dark and distorted angles that we would never want to experience in real life.

Well, this is a classic, but every time I read Guy de Maupassant’s “The Horla” I love it more. It’s a strange, subtle, and occasionally hilarious text that actually fits the Blurring the Line theme very well—like in Henry James’s “The Turn of the Screw,” it’s hard to say what’s really going on, whether there’s really a monster or if the narrator’s losing his mind. But there’s this gradual increase of psychological tension that just grabs on and doesn’t let go.

You could tell me pretty much anything about octopi and I’d believe you. I mean, they have nine brains. Of course they’re psychic. And who knows what they’re doing out in the deep ocean. They could have a whole cephalopod society down there. Are they malevolent? Not yet, but at some point I bet we’ll manage to really piss them off. I’m just glad I live in the middle of the continent.