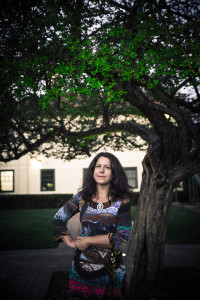 You can find her at http://kaaronwarren.wordpress.com/ and she Tweets @KaaronWarren

A New Scientist article and elsewhere, about a ‘grave-sniffing device’ that helped investigators locate graves. I wondered if it worked like a metal detector, and how it would feel to hear the device beeping in ordinary places.

I recently heard someone saying that horror began with the invention of fire, because that’s when flickering shadows appeared in the corner of your eye. To me horror is the shadows; movement, concealment, the unexpected. It’s the irretrievable and the irreversible.

Norman Prentiss, “In the Porches of My Ears”

4.What horror novel should everyone read?

Alan Ryker, “Dream of the Serpent”

That we live another life while sleeping, and in that life our moral compass shifts.