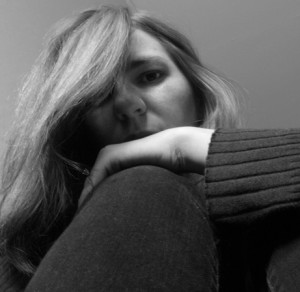 Alex C. Renwick is a dual Canadian/US writer living down the street from a volcano in an Edwardian home filled with fossils, broken shells, dried willow branches, and other very pretty dead things. Her stories have appeared in Ellery Queen’s & Alfred Hitchcock’s Mystery Magazines, Machine of Death Vol. 1, and The Exile Book of New Canadian Noir. Find her at alexcrenwick.com or on Twitter @AlexCRenwick.

I’m intrigued by thoughts of what scares us, and more specifically, why we seek it out. If it’s true we writers write about what intrigues us, then I find the concepts of nihilism and self-destruction fascinating — why are we so drawn to that which has the power to destroy us? Anyone who’s ever experienced serious injury or disease, or chronic pain or depression or similar challenges, might recognize the internal teeter-totter my character goes through in “A Peripheral Vision Sort of Friend.” Think of Frida Kahlo’s painting “The Broken Column,” in which the artist’s torso is cracked open to expose her crumbling spine, her body held together with surgical straps and studded with popping nails as if it were a failing scaffold.

Hah! When I first noticed my work selling to self-described horror markets I went on a quest to discover what “horror” meant to anyone. I asked other writers, readers, editors, but when no clear defining characteristic emerged like it did when asking people’s thoughts on historical or science fiction, fantasy, western, crime, or even romance (all very broad genres with lots of variety), I decided it was an overlay, a flavour and approach to storytelling intended to elicit a particular sort of response rather than a distinct, much less complete, genre definition (humor falls into this category too). For me, the most horrifying stories leave one with a prevailing sense of bleakness.

This has two insanely different answers, so I guess it depends on what you’re seeking from your reading experience. My favorite dark fiction has lots of pathos, imparting an intense and overwhelming sense of loss rather than dread, like so much beautiful short fiction by Shirley Jackson or Joyce Carol Oates, or the haunting K.W. Jeter story “The First Time,” or Raymond Carver’s “Tell the Women We’re Going” and “So Much Water So Close to Home” from What We Talk About When We Talk About Love. But the stories that horrify me most I never want to read again and would be hesitant to burn into anyone else’s brain — that’s how powerful fiction can be! How traumatic! (Okay fine: “Ted’s Collection” by Claude Lalumière or “The Phone Woman” by Joe R. Lansdale.)

“Horror” being such an elusive and malleable concept, I’m not sure I’d know how to classify a “horror novel.” My faves that might fall into this category would be Shirley Jackson’s We Have Always Lived in the Castle and Patricia Highsmith’s The Animal-Lover’s Book of Beastly Murder — both of which are personal favorites precisely because they do not leave me with a sense of bleakness. For that I’d have to turn to something like Cormac McCarthy’s The Road. No sense of hope at the end of that one, not on my reading of it.

Well, living in North America’s beautiful and mysterious Pacific Northwest, I’d be practically a traitor to the region not to mention Sasquatch. But personally, I’m terrified and intrigued by what might be at the deepest crevices of our vast and undercharted oceans. I mean, we know more about the surface of Mars than we do about the ocean floor. That’s scary — and amazing!