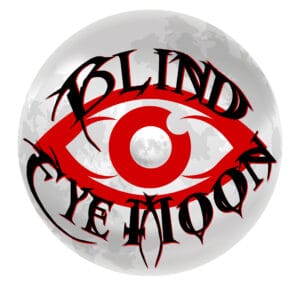 BLIND EYE MOON are the best band in the world. At least, that’s true in the fictional world of Gulpepper. They first appeared in “The Band Plays On” in THE GULP, and they get another turn later on in THE FALL. A lot of people started talking about how the band should have their own line of merch, like a real band. It seemed like a fun idea. So I designed a band logo (with some valuable help from my friend, Dennis Lum – thanks, Dennis!) The logo is what you see there on the left.

I’ve subsequently made a whole line of merchandise. At this point, it’s split over two stores, which is a bit annoying. I already had a merch line at Redbubble, so most of the stuff is there. But they don’t do double-sided t-shirts and you can’t have band merch without a tour shirt, so I set up another store to manage that. At some point I think I’ll try to move everything into one place, but for now, you can get:

There’s a different t-shirt here – this is a more subtle shirt with the logo as a “chest pocket” design instead of the full front design (see below).

All that stuff is at the Redbubble store, so you can have a look around my storefront there too to see what else I have.

And here’s the double-sided tour shirt, which is currently at a different store, as seen below.

Any problems, give me a shout!