My latest reviews are up at Thirteen O’Clock. I’ve been enjoying Blackbirds and Mockingbird by Chuck Wendig. Excellent dark urban fantasy horror thrillers. Review excerpts below. 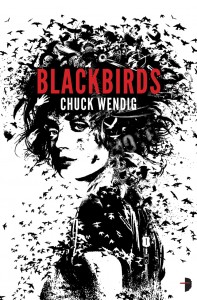 Blackbirds is a novel by notorious internet pottymouth, Chuck Wendig. Chuck’s online writing advice and sheer volume of bloggery is quite impressive and I was slightly dubious about wading into his actual fiction for the first time. I really wanted to like it, but wasn’t sure if I would. I needn’t have worried.

The story follows ballsy, attitude-ridden, hardass, Miriam Black, who has the power to know, from a single skin-on-skin touch, when a person will die. She’ll see in graphic detail, just once, the first time she touches a person, exactly how that person will shuffle off. She’s never wrong and she can’t change anything that happens. What she can do is make notes about the people who are going to cark it and be sure she’s nearby at the time to loot the corpse. That’s how she makes a living. Pretty dark stuff.

But when Miriam hitches a ride with Louis Darling and shakes his hand, she sees that in thirty days Louis will be murdered just as he seems to spot her behind the killer. Miriam knows from experience she can’t save him, but if she’s there as he’s murdered, she’d better try, in order to save herself if nothing else.

Wendig delivers this story like shotgun blast after shotgun blast of action and smartmouthed dialogue. The characters, for the most part, are excellent. Miriam is a very well-conceived invention, a real basketcase, and Wendig manages her well.

Read the rest of the review here: http://www.thirteenoclock.com.au/blackbirds-by-chuck-wendig-review/ 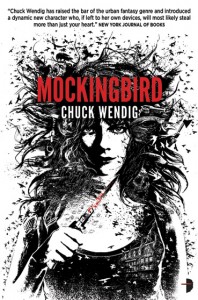 Mockingbird is Wendig’s second novel from Angry Robot Books and the sequel to Blackbirds (which I reviewed here.)

Mockingbird picks up a year or so after the events of Blackbirds, with Miriam and Louis in some kind of stable situation. But this is Miriam Black, so we know that’s not going to last. Louis sets Miriam up with a job using her special power to see how people are going to die. A friend of his works at a school for troubled girls and wants to know if her suspicions of terminal illness are well-founded or not. Miriam reluctantly agrees to use her powers for good.

While at the school she touches a young student, a troubled teen called Lauren, and sees her suffer a hideous death, aged eighteen, at the hands of a particularly nasty serial killer. This leads Miriam to investigate further and she begins to uncover a lot of horror, murder and mayhem, dragging her through several twists, reversals and life-threatening scenarios.

Once again, Wendig showcases his excellent writing skills, with tight powerful prose, locked into the voice of his characters like a tick to exposed skin. The character of Miriam definitely grows in this book – she’s explored more deeply, we discover more about her background and what has led her to be the way she is. She also begins to realise what she is to become, where her own destiny lays.

Read the rest of the review here: http://www.thirteenoclock.com.au/mockingbird-by-chuck-wendig-review/