Talk about appealing to the lowest common denominator. I was both amused and disappointed when I read about this in yesterday’s Sydney Morning Herald. It’s one of those strange crossovers between real life and fantasy novels.

Indonesia is the world’s fourth most populous nation (with around 237 million people) and it has the largest Muslim population in the world. It also has an incredible range of cultural and religious diversity across its 17,508 islands. (I know, that’s a lot of islands!) And yet the current president and almost certainly returning incumbent is playing into the basest of superstitions in a bizarre display during the elections.

President Yudhoyono claimed on Friday that black magic spells had been cast against him and his campaign team. Antara, the official Indonesian news agency, quoted him as saying, “Many are practising black magic. Indeed, I and my family can feel it. It’s extraordinary. Many kinds of methods are used.” I wonder what he’s feeling exactly, and what those many kinds of methods actually are. 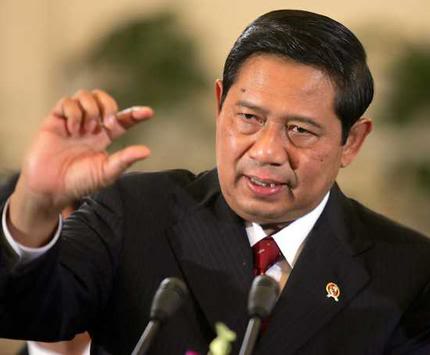 So how does someone deal with such a thing in the modern world?

“I have come to the conclusion that only prayers can defeat black magic attacks. For instance, last night I kept praying all the way to the venue of the [candidates’] debate along with my wife, aides and driver.”

Right. Remember, this is the current (and almost certainly returning) president of the fourth most populous nation in the world.

Another smear campaign during the election process has been to portray the wife of Mr Yudhoyono’s running mate, Boediono, falsely, as a Catholic. Look out! The wife of the running mate is *gasp* a Catholic! You can’t trust them, you know. You know where you stand with superstitious Muslim black magic shamans, but you can’t trust a Catholic. Which she’s not anyway, apparently.

It remains unclear whether this so-called “black operation” was launched by supporters of Mr Yudhoyono and attributed by them to rival party Golkar, or actually carried out by Golkar or its associates. But whether he was responsible or not, Golkar’s candidate, Jusuf Kalla, has run an extensive advertising campaign featuring his wife and the spouse of his running mate proudly wearing the traditional Islamic headscarf. It’s the “No Catholics Here” platform of the opposition.

Seriously though, who cares? What about some actual political policy? Are we still in the dark ages? According to the Herald, “The President… has campaigned on his record of bringing economic stability to Indonesia, crushing terrorism at the same time as attacking the country’s endemic culture of corruption.”

Maybe he’ll take on those pesky black magicians if gets another term in office.