The Balance Omnibus Edition is out now 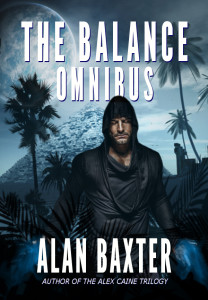 So those fine folk at Gryphonwood Press have put together a pretty sweet deal here. They’ve made an Omnibus Edition of my Balance Duology and thrown in a couple of extra short stories too. So this is a single volume (in ebook and paperback) that contains both novels, RealmShift and MageSign, plus two short stories, “Running Wild With The Hunt” and “Stand-Off”, which both feature Isiah, the protagonist from the novels.

The first of those short stories was originally published in the Seven Realms anthology, The Game, with yarns riffing on that famous short story, “The Most Dangerous Game”. The other short included in the Omnibus was originally published by Wily Writers. Neither of those yarns have been much in circulation for a quite a few years now, so it’s nice to have all the Isiah stuff in one place at last. Especially with such a damned cool cover on it!

And before the message start, I’ve been asked a lot whether there will be a third Isiah novel. Will The Balance duology become a trilogy, or even a longer series? I know there’s a fair few Isiah fans out there and that makes me happier than you could ever imagine. But the answer is a bit vague: Never say never. I don’t currently have plans for a third Balance book, but it is possible. I have a thing on my wall in the BaxCave with a list of projects on it – all kinds of books that I plan to write. On that list is “Balance 3?”

I’d need really good ideas and a strong plot to go ahead with it. I do have some inklings, but I plan to let them percolate for the foreseeable future and we’ll see what happens. So it’s possible, but in the meantime, The Balance Omnibus has all the Isiah goodness in existence right now. The ebook is pretty much everywhere already and the paperback edition will be out any day now. Get it wherever you usually get books – any problems, give me a shout. Meanwhile, here are the links for the major ebook stores: