I’m no stranger to inking my skin. For a long time now I’ve wanted a writing related tattoo – a writer’s quill, in fact. I know several writers who have the quill or a variation of it, so it’s definitely a bit of a thing among writerly folk. In fact, myself and two friends all discovered a couple of years ago that we wanted a quill tattoo and decided we would get one together at the Australian Worldcon, as we were all going to be there. As it turned out, only one of us, who happened to live in Melbourne anyway, managed to organise it then. She got a very cool peacock-style quill on her thigh. It’s taken me until now, two years later, to finally get mine. The third among us, and he knows who he is, is still very slack on the whole affair.

Anyway, I wanted my quill to be unique, obviously, even though it was following a common theme. I wanted it to reflect me as a person and a writer, and to reflect my writing and style too. I worked on the design for a long time. I’m no artist, so I had to source suitable images and work in photoshop until I’d built the design I wanted. Then I took it to a tattooist of high repute, Karen Rand of Rand Family Tattoo. Karen did an amazing job of turning my photoshopped design into an actual tattoo. I couldn’t be happier with the finished result.

Along with the quill/writing aspect, you’ll see that there are obviously other influences at work – ravens, crows, bats, clouds, and so on. There’s actually a lot going on in this design, but tattoos being, at their core, intensely personal things, I’m going to go into too much detail here. Feel free to interpret it however you see fit. If you get me drunk at a con one day, I might be persuaded to talk more about it.

(Note: the fact that the tattoo is on my chest meant that there was very clear nipple action in the photos below which, when posted online yesterday, caused quite a stir. So I’ve spared you all the nipple in this version.) 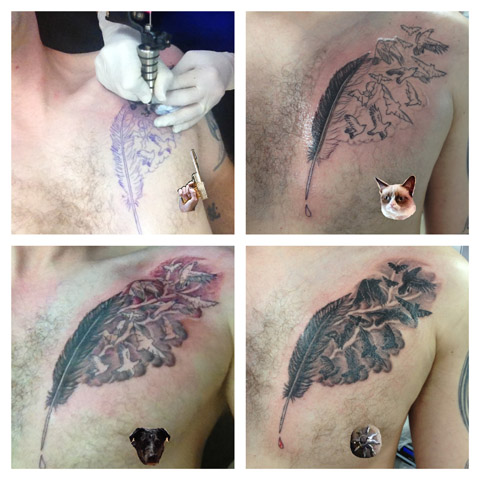 These photos are obviously taken during and right after, to show the process, so the skin is very red. Once the tatt heals, all the areas that look red or brown will settle back to black or grey. I’ll try to remember to post a follow-up pic when it’s all healed.