An Audience with Datlow and Dann

This last weekend I went down to the Mayday Hills Lunatic Asylum in Beechworth. I could just leave it there, I know, but I went for a special reason. Asylum Ghost Tour owners and Asylum folk, Geoff and Dawn Brown, had organised an audience with Ellen Datlow and Jack Dann, hosted by Kaaron Warren. A chance to listen to the expertise of Ellen Datlow? A chance to hang out with good pals like Kaaron and Jack, and listen to the their expertise? A chance to hang out with whoever else was there? I was there like a shot. I drove down with Grimdark Magazine editor and all-around great guy Adrian Collins. We had an absolute blast, and did the ghost tour afterwards as well. I also got to meet my AHWA mentee, Silvia Brown, and pals like Gerry Huntman, Steve Paulsen, Matt Summers and others, and of course, to catch up with Geoff and Dawn again. It really was a tremendous time and one of those things that just reinvigorates the urge to write. So I’m off to do just that! 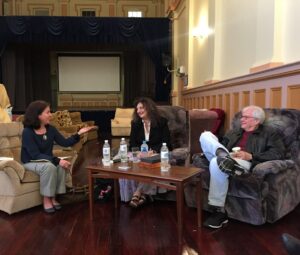