Today I have a guest post from Justin Woolley, whose new book, A Town Called Dust, is out today. It’s described thus: “Stranded in the desert, the last of mankind is kept safe by a large border fence… Until the fence falls.” Sounds good, right? Here Justin talks about his apocalyptic Australian setting. 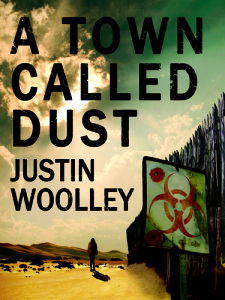 The Australian desert – a vast landscape that stretches flat and empty all the way to the horizon. When you’re standing out there it’s a place that seems to fill up the entire world, as if the whole planet is nothing but red dirt that feels like it sits mere metres from the burning sun. Out there it’s easy to think that maybe the world really has ended and you’re among the last people living on a scorched earth.

Alan invited me to write a blog post about why I chose such a distinctly Australian setting for my novel, A Town Called Dust, and what the pros and cons of this choice were. While as with all aspects of a story the setting is usually the coalescing of a number of smaller ideas but broadly speaking there are two reasons I chose the Australian desert as the place my young adult post-apocalyptic dystopian story would unfold.

The first reason, and probably the most important to the atmosphere of the book, is because of the imagery I’ve described above. As I mentioned, A Town Called Dust is a post-apocalyptic story and the Australian desert provides a rich landscape that invokes a feeling of vast emptiness, even lawlessness. In many ways it already feels post-apocalyptic – just think of Mad Max – the imagery of the Australian outback perfectly captures the feel of a post-apocalyptic wasteland and it’s one that already exists, not requiring me to drop nuclear weapons controlled by runaway artificial intelligences or punch an asteroid into the earth due to Bruce Willis’ failure to save us. Although that said, I have populated the world with undead zombie-like ghouls so there is that I suppose. Without giving away too many spoilers the outback desert provides an area that can be defended allowing us to keep the ghouls out but it’s a place that also makes it easy to keep people in, and keep them under control.

The second reason I chose the Australian setting was that the inspiration for this book came while I was working as a teacher. This experience made me reflect on the books I had read in high school. I wanted to write a book for young adults set right here in Australia. I remember reading the Tomorrow When the War Began series as a teenager and feeling a real buzz about this incredible story happening in a familiar setting, my own country. Not only that but in that series the Australian bush almost became a character in its own right. Most other books and movies I was into, particularly those in the science fiction, fantasy and dystopian genres, even if they were set on earth were set in places I’d never been. While I think the book has universal appeal I’m really hoping the setting helps it strike something of a special chord with Australians.

In terms of the advantages and disadvantages of using this setting I suppose I’ve already discussed the advantage and that was that the Australian desert, even as it is now, provides the exact desolate atmosphere I was after in the setting. The main disadvantage also ties into my reasons above, the second one in particular. I needed to find a balance between appealing to a global audience while providing that sense of belonging I was going for with local readers. That meant being careful about how much Australiana I loaded the pages up with from language and slang, to place names and the names of certain aspects of society. Basically I had to go easy on the ‘strewth you flaming galah’ – not that I’d ever want to use that sentence in a book but you get the idea. A good example is the military in the Territory (the area the characters live) are known as Diggers, this has immediate connotations with Australian readers that others, say a reader from the United States, may not have the cultural basis for. With most things this doesn’t matter, but there’s a few little easter eggs waiting in there.

So that’s it really, hopefully people enjoy the world I’ve built using the Australian desert as the backdrop. Having written this book now might I suggest that if the zombie apocalypse does hit us here in Australia let’s not all move inland to the red centre, things may not work out that well. 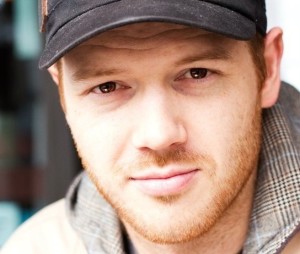 Justin Woolley has been writing stories since he could first scrawl with a crayon. When he was six years old he wrote his first book, a 300-word pirate epic in unreadable handwriting called “The Ghost Ship”. He promptly declared that he was now an author and didn’t need to go to school. Despite being informed that this was, in fact, not the case, he continued to make things up and write them down.

Today he is the author of several published short stories and has a number of graphic novels in development. A Town Called Dust is Justin’s debut novel and will be published by November 13th, 2014 by Momentum Books.

In his other life Justin has been an engineer, a teacher, and at one stage even a magician. His handwriting has not improved.