AND FIRE POURED FORTH is out now. 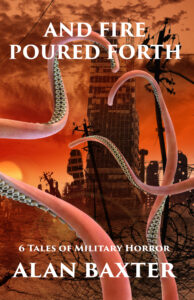 I decided to drop a surprise book on you all. And Fire Poured Forth is out now, wherever books are sold!

When my story “In Vaulted Halls Entombed” (from SNAFU: Survival of the Fittest) got picked up by Blur Studios and Netflix for LOVE DEATH + ROBOTS, apart from being beside myself with joy, I realised I had a handful of good military horror stories out there now and maybe I should collect them. It all started with “In Vaulted Halls Entombed”. Geoff Brown at Cohesion Press came up with the idea to produce a series of anthologies featuring stories of military horror, where the fundamental requirement was always the same: extreme military (or para-military) action and monsters. Within this over-riding remit, each volume of the ongoing series has a more focussed theme. I’ve had the great pleasure of being included in five of these volumes so far: Survival of the Fittest first, and then Last Stand, Black Ops, Medivac, and Future Warfare.

So when I decided to collect those five together, I wrote a new and original story called “And Fire Poured Forth”, to make it an even half dozen and to make sure the book had something new in it, and that story also gives this book its title. I put this book together in the first place a couple of years ago, but then LD+R bumped my story to season 2 then season 3. It’s episode 8 of season 3 if you haven’t caught it yet – they did an amazing job with it.

Then, when it did come out, I realised there were already three books with “In Vaulted Halls Entombed” in them. The original SNAFU volume, my second collection, Served Cold, and the soon-to-be-released LD+R anthology to accompany the series. So I decided to hold off on this mini-collection for a while. I gave it about 6 months after LD+R season 3 aired, then though that was time enough. So here it is.

I strongly recommend you read all the SNAFU anthologies out there (a new one has just dropped called “Dead or Alive” and I’m lucky enough to have a story in that one too). I also recommend you watch LOVE DEATH + ROBOTS on Netflix. Apart from my obvious bias, it’s a genuinely outstanding series and I hope there are many more. Meanwhile, I hope you enjoy reading these yarns as much as I enjoyed writing them. And I also hope there’ll be many more from me to come.

From cosmic terrors in underground caverns to warrior nuns protecting humanity to invisible aliens decimating a faraway world, within these pages you’ll find six stories of military horror. Taken from the pages of (or inspired by) the SNAFU anthology series, where the remit is for stories crammed with extreme action, monsters, and military mayhem, everything here will leave you breathless. Lock and load, people. It’s going to be intense.