Man, what a night I had! We launched The Alex Caine Series in style on Thursday 30th June at Galaxy Bookshop in Sydney, so now all three books in the series (so far!) are out in the wild and on bookstore shelves across Australia and New Zealand. And Galaxy have a bunch of signed copies of all three if you’re quick. I’ve also just learned today that the series took out the 1, 2 and 3 spot in Galaxy’s bestsellers for last week, so that’s just fucking fantastic. The US, UK and everywhere else will start to see their release from December this year, so hang in there, you guys! Meanwhile, I thought I’d post here wrapping up everything that’s accompanied the launch so far. 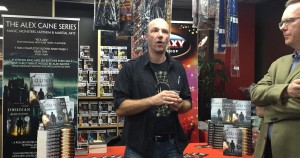 Here I am crapping on about something while Garth Nix watches thoughtfully.

Galaxy Bookshop were fantastic, and with the publisher, HarperVoyager, they put on a great event. Garth Nix was a superb MC and official launcher, and a decent crowd turned out to make an absolutely stellar night. I’m so lucky and so grateful to everyone involved that I could enjoy such a great event. This post will collect everything in one place, starting with a video of the launch itself. It’s about 20 minutes and records the Q&A with myself and Garth, then questions from the audience. Massive respect to Alice Wood from Voyager, who I asked to film it and who stoically held my phone steady for the entire time! Also, apologies for anyone getting motion sickness watching this – I honestly had no idea how much I sway when I’m standing around talking.

After the video will be a link to a huge photoset on Flickr, thanks to the amazing Cat Sparks for that. She’s truly the Aussie SFF paparazzi master. After the link to the photoset will be a series of links to all the guest posts about the series so far, where you’ll find interviews with me, with Alex Caine, posts about fighting, writing, psychopaths and more. So enjoy, and thanks again to everyone who made all this possible. This is what it feels like to be living the dream. 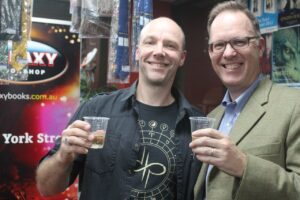 Video of the launch, with myself and Garth Nix:

Here, Garth asks me all kinds of questions about the series and its origins, and I talk about favourites, paths to publishing, manuscripts under toilet doors, and more.

Photoset of the launch and the dinner afterwards, with huge thanks to the amazing Cat Sparks:

I’ll list the interviews first. They’re all a bit different, so well worth having a squizz at them all, even if you just skim the questions for things you might be interested in.

Interviewed by the wonderful Angela Slatter:

Interviewed by Ian McHugh – this one is just slightly spoilery.

And the guest blog posts:

At Speculating on SpecFic I talk about why I write dark fiction:

At Book Frivolity I explain that I’m really not a psychopath, honest:

At Kaaron Warren‘s blog, I talk about the spark that started the Alex Caine fire:

And at the Voyager blog, I talk about fighting as a metaphor for life: 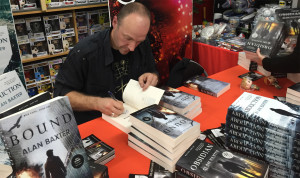