WHO IS ALAN BAXTER?

Alan Baxter is a British-Australian author who writes horror, supernatural thrillers, and dark fantasy, liberally mixed with crime and noir. He rides a motorcycle and loves his dog. He also teaches Kung Fu. He lives among dairy paddocks on the beautiful south coast of NSW, Australia, with his wife, son, dog, two lunatic cats, several tropical fish, and a lizard called Fifi. Read extracts from his novels, a novella, and short stories at his website – www.warriorscribe.com – or find him on Twitter @AlanBaxter and Facebook, and feel free to tell him what you think. About anything.

Alan’s novels include the urban horror novel, Devouring Dark (Grey Matter Press), the urban horror noir novel, Hidden City (Gryphonwood Press), the dark supernatural thriller trilogy, Bound, Obsidian and Abduction (The Alex Caine Series, HarperVoyager/Gryphonwood), and the dark supernatural duology, RealmShift and MageSign (The Balance 1 and 2, Gryphonwood Press). He has also writes novellas including the supernatural noir, Manifest Recall, and its sequel, Recall Night (Grey Matter Press), the cosmic horror noir, The Book Club (PS Publishing), a sci-fi/noir novella, Ghost of the Black, and a gonzo Ozploitation creature feature novella called The Roo. Alan’s latest book is a combination of both, with five interconnected novellas making a kind of mosaic novel in the creepy Australian cosmic horror collection, The Gulp. As well as long fiction, Alan has had more than 80 short fiction publications in magazines and anthologies throughout the world. His work has been translated into French, Spanish, German, and Japanese. His short fiction has appeared in The Magazine of Fantasy & Science Fiction, Beneath Ceaseless Skies, Daily Science Fiction, Postscripts, and Midnight Echo, among many others, and more than two dozen anthologies, including the Year’s Best Australian Fantasy & Horror on several occasions. Alan’s award-winning first volume of collected short fiction, Crow Shine, was published by Ticonderoga Publications in 2016, and a second volume of collected short fiction, also an award-winner, Served Cold, was published by Grey Matter Press in 2019. Alan also collaborates with US action/adventure bestselling author, David Wood. Together they have co-authored the horror novel, Dark Rite, the action adventure series, the Jake Crowley Adventures, (Sanctum, Blood Codex, Anubis Key, and Revenant), and the Sam Aston Investigations giant monster thrillers, Primordial, Overlord, and Crocalypse. Alan has also written narrative arcs and dialogue for video games, and a variety of non-fiction, including the writer’s guide to fight scenes, Write the Fight Right and the non-fiction chapbook, The Martial Art of Writing. Alan is the President of the Australasian Horror Writers Association, and a member of The Canberra Speculative Fiction Guild, Australian Science Fiction and Fantasy Writers Association and a full Active Member of the Horror Writers’ Association.

Alan is an International Master of Choy Lee Fut Kung Fu, an Inner Chamber Fire Dragon Disciple of Grandmaster Chen Yong Fa. Alan runs the Illawarra Kung Fu Academy. He has been a British National Champion, and has competed in Europe, Australia and China. Alan continues to train with his master, and regularly travels to China to train and extend his skills. He wrote the popular writer’s resource, Write The Fight Right, a short ebook about writing convincing fight scenes, and the non-fiction chapbook, The Martial Art of Writing, which draws comparisons between the martial and creative arts.

HE KICKS SOME ASS! 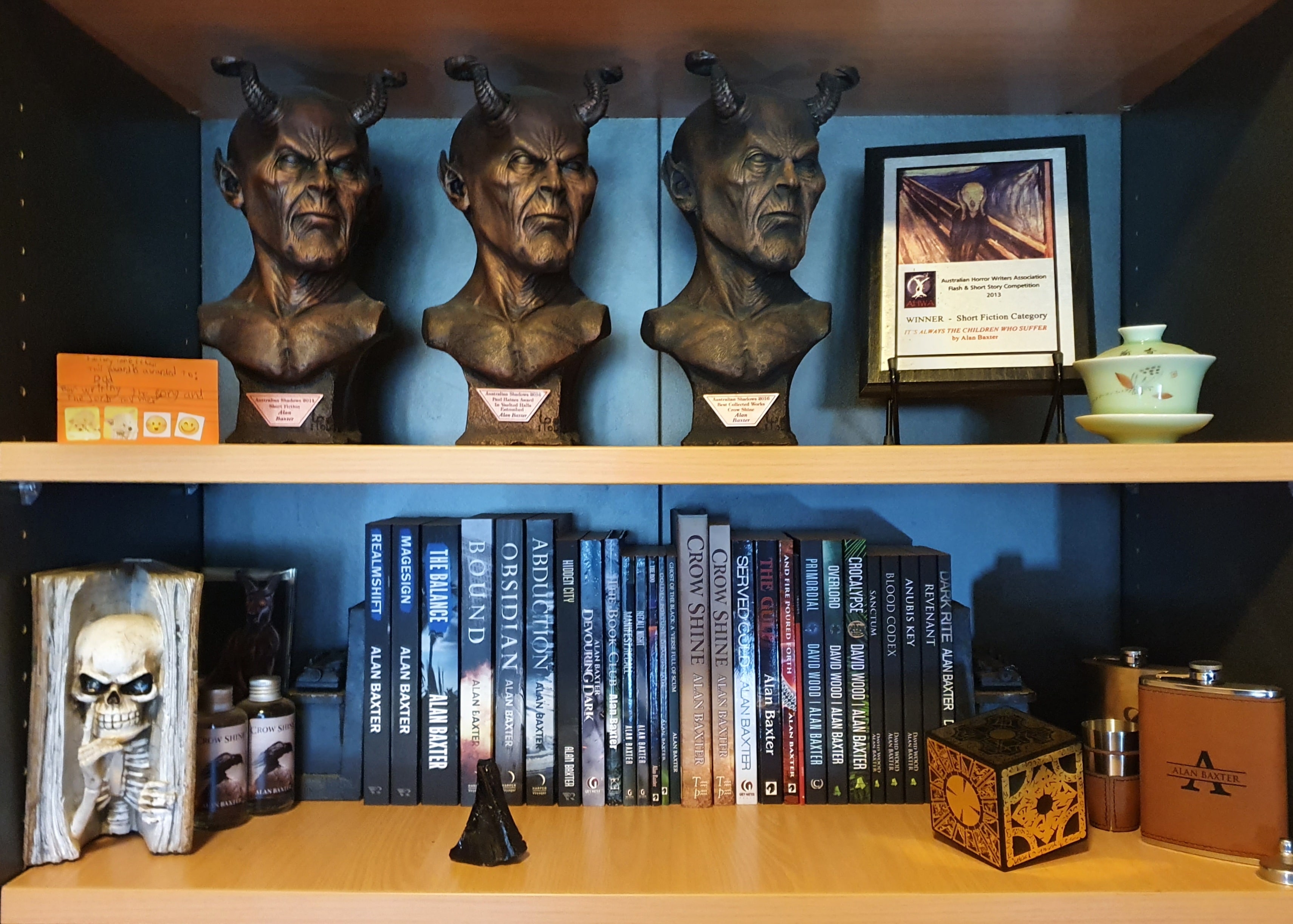 There’s a full press kit here. Click on the headshot above for a higher res version if needed for promo. Contact Alan for any queries at [email protected]

Alan has previously appeared as a guest and panelist at festivals, events, and writers’ centres around Australia, including Worldcon in Melbourne in 2010, a variety of writers’ festivals, and he’s been a Supastar guest at the Supanova fan expo in several cities, and a guest at OzComicCon in Sydney. Alan has been a Guest of Honour at Conflux, Swancon, and GeyserCon. He’s run workshops on all kinds of writing-related subjects including short story clinics, novel writing, fight and action scenes, author platform, social media and more at schools, libraries and several State Writers’ Centres among other venues.

Want him to come speak at your school, library, writers’ group, or event? Please get in touch.

Click any book cover you see on this site to learn more about that book.