Angela Slatter has just had Book 2 of her fantastic Verity Fassbinder Series, Corpselight, published. It’s the sequel to the wildly successful Vigil. I asked Angela 5 big questions about her work.

1. Why did you choose to set your series in Brisbane? 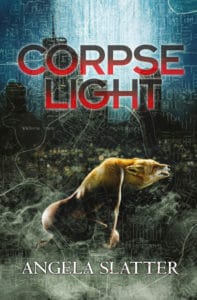 Coz I live here! I love the city and there’s a strangeness to it that works well with urban fantasy. The city looks so very normal that there must be something strange going on underneath, right?

2. I’ve been writing urban fantasy (among other things) professionally for more than 10 years now and throughout that time numerous people in the industry have told me that urban fantasy is dead. You’ve just published the second in your amazing urban fantasy series. So: is urban fantasy dead? Why do people keep insisting that it is?

Maybe it’s just a very good looking corpse that refuses to lie down? I got a three book deal based on an urban fantasy series in 2015 … I think people are happiest predicting death knells, but we’re in a genre that continually renews itself … I don’t think readers get sick of it because it’s constantly bringing something new to the mix, it’s hybridising and cannibalising … it’s like the Borg Collective of genre …

3. You built a name for yourself with an impressive body of short fiction publications. What’s better? Short fiction or novels?

Both! But short stories are shorter … I do love the precision I can achieve with a short story … then again, it’s really nice sometimes to just let go and write All Of The Things that you usually have to leave out of a short story … to be a bit self-indulgent until you’ve got to do an edit, at any rate.

4. How much of you is in Verity Fassbinder?

5. If you scored a TV or movie deal for your series, who would be your dream actors to play your lead characters?

The dark haired Kate from the Katering Show as Verity!! That’s my only dead set choice.

[Edit – that would be Kate McCartney, pictured below! – Alan] Thanks for taking time to answer these questions, Angela. Where can people find you and your books? 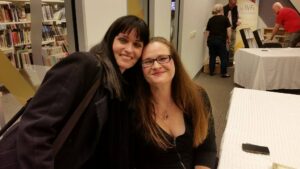 Above: Angela Slatter (right) with Kim Wilkins at the launch of Corpselight.