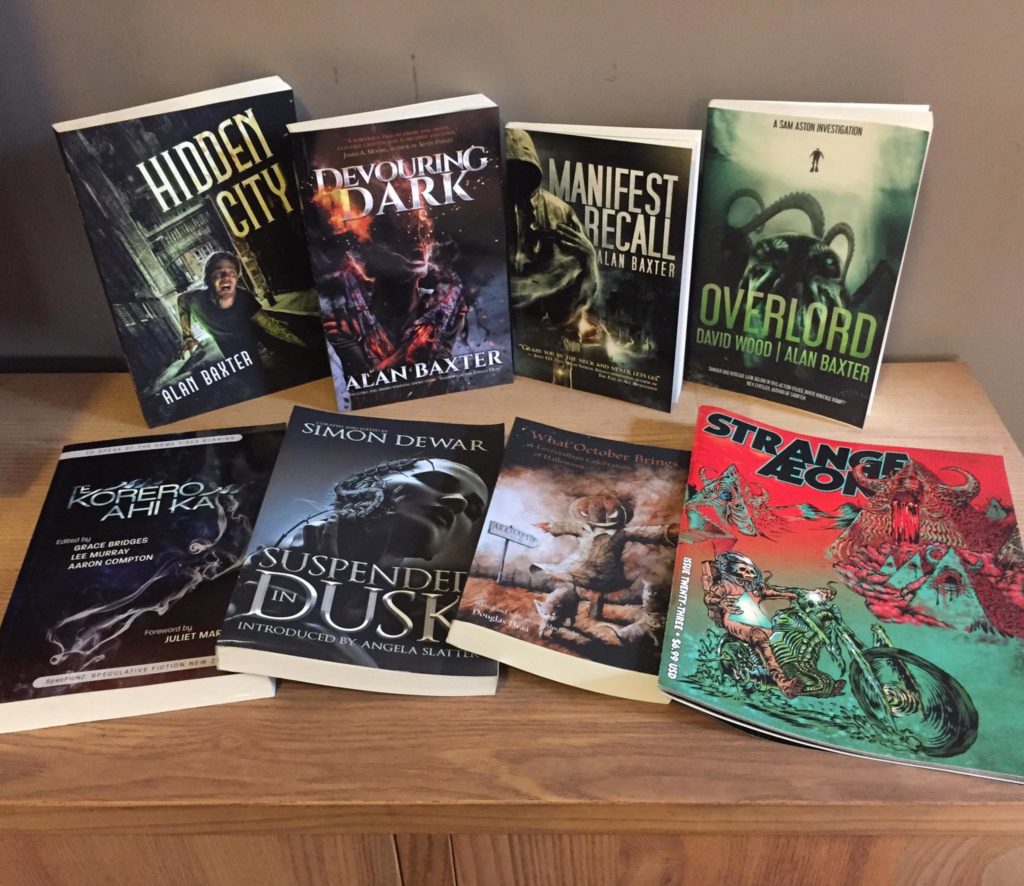 2018 has been a pretty solid year for original publications! Three novels HIDDEN CITY, DEVOURING DARK, and OVERLORD (co-written with David Wood), one novella, MANIFEST RECALL, and four short stories: “Simulacrum of Hope” in Strange Aeons Magazine (a weird Australian horror story), “Waters Strangely Clear” in the What October Brings anthology (a Lovecraftian story set in Innsmouth), “Crying Demon” in Suspended In Dusk 2 (a digital horror story), and “Her Grief In My Halls” in the Te Kōrero Ahi Kā anthology (an Australian gothic ghost story).

I’ve never has four books out in one year before, and likely won’t again, but that’s the strange timelines of publishing for you. I certainly didn’t write all this stuff in one year. This also sees 10 books with my name on the cover (and a further 5 with my name and David Wood’s) and that feels like quite a milestone. I’m incredibly happy with this. And, with a bit of luck, I’m well on the way to 2019 publications, as I’m always working on something new. Often more than one something.

2018 has also been a stellar year for writerly things in general. I’ve had the privilege to be a guest at Supanova in Sydney and Perth, a guest at Oz Comic-Con in Sydney, and a guest instructor where I taught workshops for the Sydney Writers’ Festival Live & Local event in Wollongong, at the Shaolhaven Writers’ Festival, and the Wollongong Writers’ Festival. I’ve had several other book store and book club events around the country, the pinnacle of which was the recent amazing book tour for the launch of DEVOURING DARK which took in Sydney, Brisbane and Canberra.

And in March I went to the US for the first time and attended StokerCon (as a member, not a guest) and that was an incredible experience. I’m hoping to go again in 2019.

All this is possible because there are you folks out there who want to read the shit I make up. Which blows my mind on a daily basis. I’m honestly blessed and privileged to be able to do all this stuff, and it’s thanks to you, out there, the readers. So if you’ve ever read a book of mine, talked about one, reviewed one, shared one or gifted one, I seriously can’t thank you enough. You are a rock star. For my part, I promise I’ll keep doing what I do, and hopefully you’ll keep coming along for the ride. With any luck we’ll pick up more folks along the way, so do be sure to keep spreading your enthusiasm for my work. Reader word of mouth is the blood in the veins of a writer’s career. Thank you.